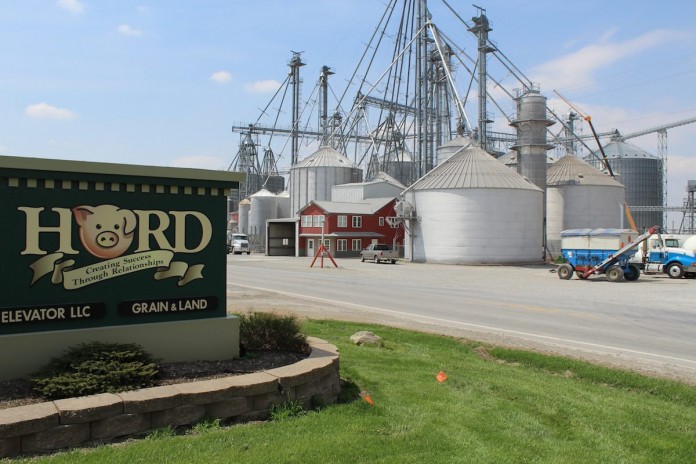 BUCYRUS, Ohio — Farming is a diverse and modern enterprise at Hord Livestock Co. in Crawford County.

The farm consists primarily of the swine division, the beef cattle, and the field crops and feed business.

Now in its fifth generation, the family farm business employs about 140 workers who are mostly full-time, and partners with an additional 100 producers in Ohio and Pennsylvania who finish the farm’s swine on a contract basis.

And it takes every one of those employees and contract growers to get the job done, including some third-party help during the busiest of times.

Altogether, the farm keeps about 23,500 sows, and, with the help of contract growers, finishes about 600,000 head of swine a year. The swine and feed are all owned by the Hord family, while the contract growers provide the barns.

In addition to swine, the Hords finish about 2,000 head of beef cattle every year, and they farm about 6,500 acres. 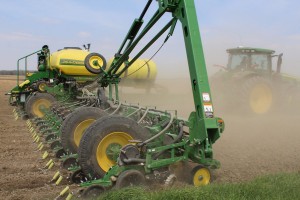 While the numbers are large, the Hords and their workers still place a personal level of care on each animal and each acre. They work directly with veterinarians, and many of their staff are trained animal handlers with college degrees.

“It still comes back to ‘it’s one animal at a time and it’s one person taking care of those animals,’” said Pat Hord, one of the owners and the swine manager.

He admits there are times when certain tasks become mundane, but he tries to remind himself and the other staff that they’re serving a bigger purpose.

Like the farm’s mission statement, Hord said the goal is to “be efficient and environmentally sound agricultural stewards.”

And, he doesn’t just use those words because they sound nice.

Hord farms alongside his wife, Janel, his parents, Duane and Inez, and his children — Phillip, 21, Colleen, 20, Mallory,14, and Melissa, 12. He also farms with two sisters and their families.

Much of the farm’s mission statement and vision is based on the family’s faith — something they don’t hide.

“Christian values are entrenched in our business,” Pat Hord said. “We’re a family that has a strong faith in Jesus Christ and that’s kind of how we look at things and kind of that stewardship principal.

“We definitely want to try to live that out the best way we can.”

Pat is considered the farm’s CEO, while his wife, Janel, is director of community outreach. She helps with the farm’s various charity and food bank projects, including organizing the farm’s annual Relay for Life team.

According to the Hords, it’s “our duty to have a major, positive impact in our neighborhood and local communities.”

Quinton Keeran, communications director for the Ohio Pork Producers Council, said the Hords built a mobile farrowing display that showed county fairgoers and attendees at the state fair, how swine are born in a barn. The goal was to take the farm to the people, realizing not everyone can get to the farm.

“What’s special about Hords is that they really do care about showing people what they do,” Keeran said. “They do things right. They care about the community, the environment and their employes and their pigs.”

The Hords grow about 15 percent of their livestock feed needs and purchase the rest from area farmers. The feed is mixed and trucked from the Hord family grain mill in Bucyrus, to the various contract barns across the state.

By retaining ownership of the swine, the Hords can manage the production while the contract grower manages the facility.

Pat Hord said what often happens is, a farmer will be looking for an extra line of income, and will invest in a hog barn. The farmer benefits from the hog profits, but also from the manure, which makes good fertilizer and reduces the amount of chemical fertilizer the farmer has to purchase.

The Hords have worked with contract growers for 21 years and find it to be a win-win relationship for both parties.
Modern barns.

The Hords keep most of the breeding swine in the family’s own barns, which allows them to manage one of the most critical parts of a hog’s life: breeding and birthing. They currently have at least three different systems of birthing barns in place, with the goal of maximizing efficiency and sow wellbeing.

One of the systems, made in Austria, involves electronic feeding. The sow’s eartag is read electronically and the feeder dispenses the exact amount of feed she is to receive.

A second system, from Denmark, allows the sow “free access” to pens whenever the sow chooses, and a third system involves individual pens for about 10 sows, with headstalls.

“We’re constantly trying different things to help us learn what we want to do in the future,” Hord said.

He said more than half of his sows are already housed in the larger pens required by the Ohio Livestock Care Standards, and that he’s well on his way to being compliant by the effective date of 2025.

It’s a major difference from when his grandfather, Robert Hord, started farming in the 1940s, with just 10 gilts in a wooded area. The litters from those 10 hogs were what got the farm started, following World War II and a sudden doubling in pork prices.

The farm has evolved with each generation since, including growing to meet more demand. Pat said the farm supports all types of farming, including small-scale, organic operations, but his family chooses large-scale.

“We feel like we are trying to be high-quality and caring about the animals, but doing it at a scale that’s larger and trying to do an efficient job,” he said.

“I think we have one of the most efficient delivery models for protein — with the swine and the cattle production — in the world.”

The farm continues to grow both in acreage and in swine, and the family is currently looking at options to help attract a pork processor to the area.

Still, they explore growth strategically and try not to take it for granted.

“It’s just one step at a time,” Pat said. “I don’t think any of us sat back and said this is exactly where it’s going to end up, but we kind of kept taking small steps and grew incrementally and always wanted to do a very good job with what we did. … We’ve been very blessed.”