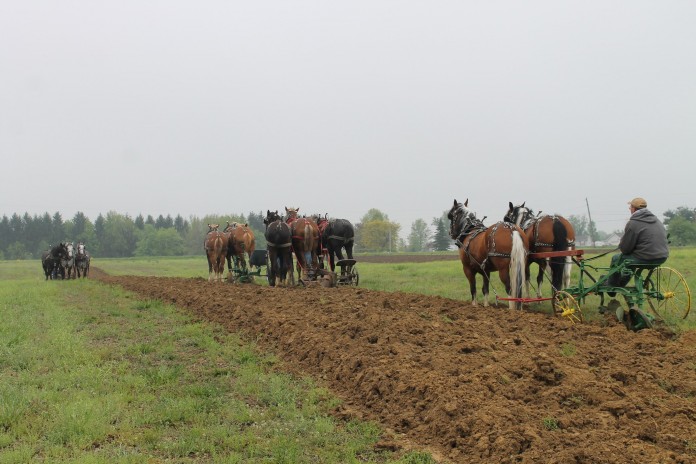 WADSWORTH, Ohio — A long row of cars were parked alongside Yoder Road May 11 in rural Medina County.

Their reason for stopping? Nearly 20 teams of horses plowing and tilling ground in preparation for spring planting.

Bob Rohrer and his wife, Jodi, held their 13th annual plow days in a field near their 70-acre farm and the event drew horse enthusiasts from across the state.
Virtually all ages were represented, from youngsters getting their first experience plowing with horses, to seasoned pros who grew up farming with horses decades ago.

Charlie Adams, who will turn 82 in June, is considered the group’s historian. He hails from Delaware, but grew up using horses on his family’s Harrison County farm near Cadiz.

“I like the horses and I like the people,” said Adams, who travels to horse plowing events across the state.

His family bought their first tractor — a Farmall H — in the 1940s. But there were times when the horses performed better than the tractor, he said.

“The horses were still better on the hills of Cadiz,” he said, adding that with the tractor, there were times someone had to walk alongside of it so it didn’t roll over.

Don Miller, a World War II veteran from Wooster, said his family farmed with horses until the war, then bought a Farmall M. They farmed near Norton, and increased to a three-bottom plow once they bought the tractor.

The teams and their masters stopped around noon for a hearty lunch, prepared by the Rohrer family and eaten inside a small machinery shed.

The plowmen and women all ate first, followed by everyone else. T-shirts were given out that featured the Rohrer farm name and a logo of a draft horse.
Bob Rohrer said he holds the event partly for the camaraderie of the plowmen, and also the opportunity to educate the public.

“They (public) don’t see it like you do in Holmes County or in Wayne County,” he said, referring to the large Amish population in those counties, which uses horses every year.

When they weren’t busy plowing, several of the horse owners spent some time discussing what they do and how horse plowing works. Some of their plows dated back to the 1800s, while others were newly built by the Pioneer Equipment Co., which manufactures modern-day farm equipment for the Amish.

As more teams of horses entered the field, it seemed more cars were pulling over to watch. And many motorists and their families got out to take pictures.
One man jokingly said “at the rate they’re going they may not have enough land.”

Shortly after lunch, it appeared he was right, as teams quickly plowed the remaining gaps in the field.

They used a variety of plow sizes, but all were one-bottom units pulled by two or more horses. A few of the plows were two-way plows, meaning they could toss the dirt either left or right, and continue plowing from the same furrow.

Operators made sure to stop periodically, to let the horses rest and to discuss what they were doing with bystanders.