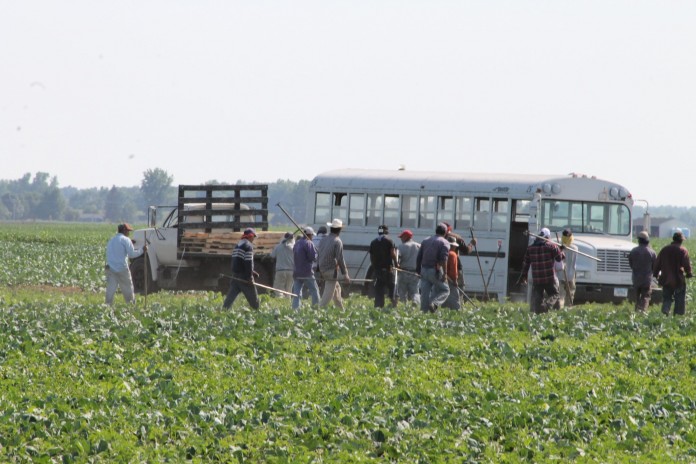 The Border Security, Economic Opportunity and Immigration Act of 2013 was formally introduced April 17 by four Republican and four Democratic senators — collectively known as the “Gang of Eight.”

Their bill would put immigrants residing in the United States illegally on a path toward legalized labor and citizenship, if they meet certain qualifications and pay appropriate fines. The bill also includes specific measures to tighten border security against future immigrants who get here illegally.

About 11 million immigrants currently live in the United States illegally and most of them could be made legal if the bill is passed.

The border security action would include spending $3 billion in border security surveillance and additional patrol agents. Another $1.5 billion would be spent on fencing and infrastructure to cut down on illegal immigration. The goal is to secure the southern border of the U.S. at 90 percent or greater.

Farmers currently rely on a labor force that is about 70 percent undocumented. The bill would help them by giving immigrants the opportunity to adjust their status to legal Registered Provisional Immigrant Status — if the worker  resided in the United States prior to 2012 and has maintained a continuous presence, and if the worker paid a $500 penalty (DREAM Act persons are exempt) and is assessed taxes, in addition to all processing fees.

Various criteria could disqualify a candidate, such as felonies and lengthy criminal records. The worker would be considered a legal Registered Provisional Immigrant for up to six years, with the chance of renewal, provided the worker passes the proper criminal background check and pays the fee again.

This type of worker, known as an RPI, would not be eligible for federal means-tested benefits, and would not be entitled to a premium assistance tax credit, through the IRS.

After 10 years, the RPI worker could pay a $1,000 penalty and upon meeting certain merit-based criteria, the worker would advance to a Lawful Permanent Resident Status. Requirements would include maintaining a physical presence in the United States, paying all taxes owed and demonstrate knowledge of civics and English.

The legislation is in the process of being introduced in the House of Representatives and is expected to be a topic of debate over the next several months.

But one thing farmers seem to agree on — at least those who use immigrant labor — is that more workers are needed and for year-round work.

“One of the major problems with the H2A program was the bureaucratic nightmare … of the regulatory process to get approval for workers to come in when you needed them, when the crops were ripe and needed to be picked,” said American Farm Bureau President Bob Stallman, in an AFBF public interview. “Delays in the process meant that the workers wouldn’t show up when there were needed. They would show up maybe two weeks later, but that was after the crop was already ripe and you know if it’s not picked when it’s ripe, you basically lose it.”

That’s true on dairy and livestock farms, as well.

Ken Rufener and his family operate a 650-cow dairy in Ohio’s Portage County. They abandoned using immigrant labor about two years ago, partly because of the regulatory nightmare of the current system.

He said dairy farmers need something “a little quicker” and “we need help long-term.”

As for American jobs being taken by immigrants?

“That’s a joke,” Rufener said. “When you hire (Americans) they don’t want to work half the time. … The Mexicans were here to work.”

“Dairy farmers need relief from having to demonstrate the seasonal or temporary nature of employment,” he said in a released statement.

A press conference introducing the bill was held April 18, a day late due to the Boston Marathon bombings. Sen. John McCain, R-Ariz, said to expect many changes to the bill, but that it represents a comprehensive effort for reform.

“None of us expect the bill the Senate ultimately votes on to be identical to the one we introduce today,” McCain said. “But we are all united in our determination that at the end of the day it remains a fair, comprehensive and practical solution to a difficult problem that most Americans can support and that stands a good chance of passing the House and being signed into law by the president.”

Other senators who made up the Gang of Eight were Democrats Chuck Schumer of New York, Dick Durbin of Illinois, Robert Menendez of New Jersey and Michael Bennet of Colorado, and Republicans Marco Rubio of Florida, Lindsey Graham of South Carolina and Jeff Flake of Arizona.