GAMBIER, Ohio — The gravel lane is long and straight at the Elliott family farm just east of Gambier, and so is the history that has kept the farm together for more than 200 years.

The farm, also known as Indian Run Farms, was recognized in July by the Ohio Department of Agriculture, as an Ohio Bicentennial Farm. A certificate was presented to the family during the Knox County Fair, July 20.

The farm was started in the early 1800s by Irish immigrant Charles Elliott, who received a patented deed for the farm in 1814, for the original 160 acres.

A sign mounted on the front of the milking parlor commemorates his life, from 1763-1836. The farm is named after a tributary of the Kokosing River.

Today, Indian Run is operated by brothers Bob and Ron Elliott (seventh generation) and their families and consists of 285 acres. The Elliotts milk about 150 Holstein cows three times a day, and grow their own field crops.

They also raise their own replacement heifers and 40-60 head of Holstein feeder calves each year. The farm still uses some buildings that date back to the 1800s that have been maintained and sided, as well as some newer structures, including the freestall barn, and the commodity shed, which was built new last fall and is used to store feed supplement.

The Elliotts have two sons involved with the operation, Bob’s son, Wyatt, 35, and Ron’s son, Josh, 38.

When it comes to who does what, “Ron and Josh are more of the cow-herd CEOs,” Bob said, and Bob is more interested in the field work. The Elliotts practice minimum and no-tillage on their rolling acreage, which consists of some hilly terrain, but not as steep as the counties around them.

The Elliotts also have grandchildren helping out on the farm — ranging in age from 3-10. For now, their biggest job is playing and enjoying the animals.

Before long, they’ll be of age to show animals at the Knox County Fair, where their fathers both showed while growing up.
Ron Hawk, of Danville Feed & Supply, supplies the Elliotts with their feed supplement and buys grain from them.

“They do an excellent job of taking care of their crops and their livestock,” Hawk said.

He said he’s done business with them over the last 45 years, and has seen their herd grow from 30-40 head, to the present-day 150 head.

“Everything has been done for a good reason,” Hawk said. “They take care of everything — all the details — and don’t try to make a big show about anything.”

Ron Elliott did most of the historical digging to document the bicentennial claim, but he admits, “it wasn’t that hard of a process.”

He mostly had to find things like the original deed, as well as Charles’ naturalization and citizenship paperwork. He searched court records in Washington County, Pennsylvania, and with the U.S. Bureau of Land Management.

Charles Elliott, the farm’s founder, had eight children. The first was born in Ireland and the rest in the United States.

Charles made the trek from Ireland in the 1790s and lived in Washington County, Pa., until the early 1800s when he moved to Knox County and founded the family’s current farm.

Asked what has kept the farm together all these years, Ron said it comes down to one word: ”Perseverance. … We’ve persevered and the family has persevered through thick and thin,” he said.

In recent years, the farm has battled extreme weather events, ranging from drought, to record rainfall. And, within the past five years, milk prices that have ranged from record lows, to record highs.

This year’s struggle was with heavy rains, which delayed haymaking at the farm, and slowed the progress of the row crops. 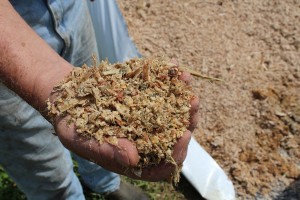 Fortunately, corn at the Elliott farm doesn’t have to reach full maturity, because they chop a lot of their crop, for something known as “snaplage.” This is similar to silage, but with more of the ear and ear husk than the stalk.

As for hay, the Elliotts make the big square bales and round bales, as well as some small square bales. Because this year was so wet, they had more low-quality hay than they wanted, and were forced to feed that to the dry cows.

The farm is a full-time venture for Ron and Bob, and Bob is also a township trustee.

Looking ahead, Ron says he’d like to see the farm evolve with newer technology. They currently milk in a double-six parlor that gets the job done, but it’s becoming outdated. One thing the Elliotts are interested in is robotic milkers, however, they are costly.

“It’s a very big step,” Ron said, noting they haven’t committed to anything yet.

The Elliotts also work closely with their crop consultant and nutritionist, which they said will be even more important in the years ahead.

“Those things earn their keep and it’s well worth having them,” Ron said.

He intends to keep the farm going, and to “pass it on, like it’s been passed on to us.”

How to stay safe when you’re ice fishing