The award was presented at an awards gala Nov. 17 in Stockholm.

A record number of applications were received from 20 countries.

“It is a worthy winner of the Swedish Steel Prize.”

For example, the weight of targeted steel parts in the combine has been reduced by 50 percent. The new design has helped to reduce the amount of welding by almost 70 percent. Production processes that were created to enable the use of high-strength steel have generated major advantages throughout the entire production chain.

John Deere is donating the prize money to FIRST, an organization aimed at encouraging an interest in innovation and technology.

“Innovation is one of John Deere’s four core values and we wish to inspire and help the next generation of innovators to grow,” said design engineer Kent Brown.

“One day, perhaps some youngster who attended a FIRST program will contribute to a company winning the Swedish Steel Prize.”

Instituted in 1999, the award is often referred to as the “Nobel Prize” of the steel industry. The annual prize, founded by SSAB’s parent company, consists of a statuette and an award worth more than $15,000 for the winner.

As part of the Steel Prize selection process, a special jury chooses a winner with any product in which high-strength structural steel, wear plate or tool steel that has contributed to an innovative design, and gives clear benefits. 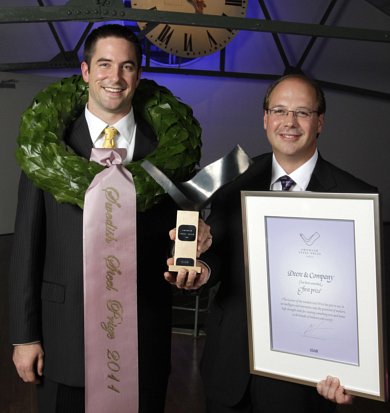