Last year I shared a story about Kenyan clergyman, Rev. Boniface Abanga, and his American friend and partner, Glenn Norris.

Abanga came back to the United States recently, and he updated me on the “Hope Chicks” project and his other initiatives that are helping change his village, Migori.

When I met with the two last year, I spent quite a bit of time discussing the project in Norris’ office.

I left that day with optimism that rubbed off from Norris and Abanga. Though I approached the story with a good amount of skepticism, the two men had me convinced that what they were doing was helping change lives.

Their recent visit to the Farm and Dairy offices proved it.

When Norris took his seat in Farm and Dairy’s conference room he opened with, a quick thank you for helping them reach last year’s goal.

Last year’s goal was to raise enough money to expand the project’s hatchery, build a church and purchase a fleet of motorbikes to employ villagers.

With the help of Farm and Dairy’s readers, Norris and Abanga met their goal.

Five motorbikes were purchased, land for the church was bought and bricks were made to construct a new, permanent structure for worship.

Unfortunately, according to Abanga, the chick operation suffered a serious loss — theft.

After Abanga returned home last year, a group of armed men broke into the hatchery operation to steal chickens and equipment. “Our spirits were very broken,” he said.

Kenyan police eventually tracked down the men, who were linked to a local restaurant.

That’s the way things are in Kenya. Joblessness creates poverty, which then creates crime. Even those who are trying to break the cycle, fall victim. According to the CIA World Factbook, Kenya’s unemployment rate is approximately 40 percent, a number that the reverend and Norris hope to change.

Abanga did have enough money to restart the program, but the theft dealt a major blow to the operation, which was nearly 100 percent self-sustaining.

Over the following couple of months, with the remaining donated money and the income generated from the motorbikes, the hatchery was relaunched at an off-site property purchased to house the operation.

Ideally, an additional building is needed to house a training center.

Two wheels to move the soul

As an American, it’s hard to imagine the importance of motorbikes to Kenya. To put it into perspective, imagine a major city without a taxi service.

Five motorbikes were purchased when Abanga returned home and five men were employed.

“With the motorbikes, you reach the community,” Abanga said.

It’s true. The motorbikes are a resource to Migori, they’re used to taxi people, but they also generate income for the drivers.

The drivers essentially rent the bikes from the church. Anything remaining after paying rent is money for the drivers to keep.

Other taxi services exist in Kenya, but, according to Abanga, many are owned by foreign companies. With Abanga’s motorbikes, all of the money stays in Kenya. It stays in the hands of the people who need it the most.

The bikes create income and keep people out of trouble, according to the reverend.

The institution anchoring every project Norris and Abanga oversee is Abanga’s church.

After returning to Kenya, Rev. Abanga organized the creation of 20,000 mud bricks that would become the building blocks of a new 400-seat church in Migori. 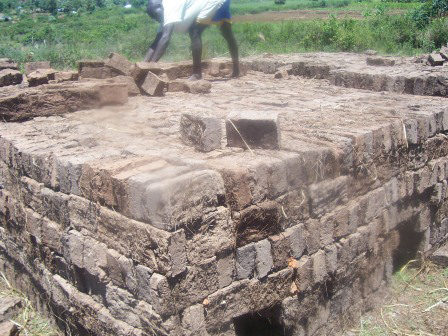 Each brick was handmade and fired. The process took a team of men two months.

Now the bricks need to be laid, something that Norris is excited to help with.

Norris, who has an extensive construction background, has designed a church that can expand from holding 400 people, to 800 and then, when the time comes, the church will be able to hold 1,200 people.

“If the money comes in, I pledge to go to Kenya, myself, and build the church,” Norris said.

Norris has traveled to Kenya in the past to oversee the construction of a well and the beginnings of the chick hatchery.

Norris says traveling to Kenya himself is important. It’ll give him the chance to make sure the construction is done by his standards and, as he’s said before, throwing money at the problem doesn’t help, there needs to be follow-through.

Rev. Abanga seems hopeful that his church can change Kenya one person at time.

“Make people productive, then things will change,” he said.

If you’d like more information, or to help Rev. Abanga with his cause, contact Glenn Norris at gcnorrisusa@hotmail.com or call 330-691-0440.