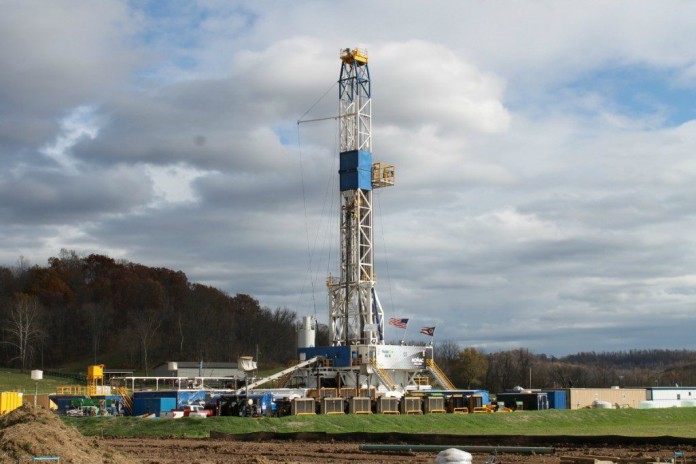 SALEM, Ohio — Monroe and Belmont counties appear to be leading Ohio in the number of new permits issued by the Ohio Department of Natural Resources in September for Utica shale wells to be drilled.

According to the ODNR report, there are 45 wells waiting to be hooked up to pipelines and infrastructure. There are currently 31 producing wells in the county.

Four permits were issued in each Sunsbury Township and Adams Township to Gulfport Energy.
There are now 59 wells either being drilled or are already drilled, and 25 producing wells in Monroe County.

The drilling boom continues in Harrison County as well, where seven permits were issued in September.

Three permits were issued in Franklin Township to American Energy Utica, and three in Stock Township toEclipse Resources. A single permit was issued in Moorefield Township to Gulfport Energy.

There are 125 drilled wells in Harrison County, 80 of which are now producing.

Meanwhile, 54 drilled wells are awaiting pipeline infrastructure. There are 25 producing wells there.

The drillers in Carroll County appear to be moving at a slower speed than when they were drilling in 2013. The ODNR issued five permits during September. All five of them were issued to Chesapeake Exploration, with four in Loudon and one in Augusta Township.

There are now 264 producing wells in Carroll County, and another 102 wells awaiting infrastructure. 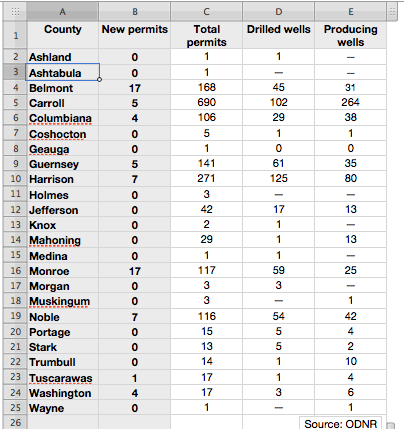 The ODNR issued five new well permits in Guernsey County. There were three permits issued in Wills Township to Eclipse Resources, two in Londonderry Township with one going to American Energy Utica, and one to Carrizo Utica.

The ODNR reports there are 61 wells drilled and 35 producing wells in the county.

A county that has been quiet for a couple of months received four permits. The ODNR issued four permits to Atlas Noble, for a wellpad on the southern end of Firestone Farms in Fairfield Township.

In Ohio, there were no Marcellus shale permits issued during September. To date, the ODNR has issued 44 permits in this play, and 27 wells are waiting for infrastructure. There are now 11 producing wells in the Marcellus.

The Pennsylvania Department of Environmental Protection issued 183 permits to drill new wells and 22 were issued granting permission to drill deeper.
Bradford County, the county where the Marcellus shale started in 2008, led the permit list in September with 36  permits, of which 32 were granted for new wells.

So far in 2014, the DEP has issued 438 permits for new wells. In September, the DEP reported there were four shale wells drilled and 75 had have been drilled so far this year.

The Pennsylvania DEP issued a total of 28 wells permits in Susquehanna County, with 26 for new wells and two for permission to dig deeper.

Greene County was second in the total number of permits issued last month. The DEP issued 32 permits, of which 27 are for new wells and five are for deeper wells.

In 2014, the DEP  has issued a total of 267 permits for new wells and 184 wells have been drilled in the county. In September, the DEP reported there were 19 wells drilled.

Another county making big strides in the number of permits issued is Butler County. The DEP issued 18 new permits during September, which brings the county’s year-to-date total to 146 permits.

In September, there were 17 unconventional wells drilled and 101 drilled in 2014 so far.

The DEP issued 16 permits in Washington County during September. A total of 14 were issued for new wells and two were issued to drill deeper.

According to the DEP, there were a total of 297 permits issued in 2014 with 205 issued for new wells and 92 issued to drill deeper. In September, there were five new wells drilled in Washington County.

So far in 2014, there were 145 unconventional wells drilled in this southwestern Pa. county.

The DEP issued 11 new permits in September for new wells. So far in 2014, 34 new well permits have been issued.

As far as drilling, the DEP reported no new wells were drilled in September, however, 12 have been drilled since January in Beaver County.

The West Virginia Department of Environmental Protection was also busy during September with the number of shale permits issued.

The remaining seven were issued to Antero Resources Corporation on five different properties.

The DEP issued 11 permits during September in Ritchie County. All of the permits were issued to Antero Resources Corporation on seven different properties.

The DEP issued seven permits during September in Wetzel County. All of the permits were issued to the EQT Production Company for well sites on four separate properties.

In Tyler County, the DEP issued five new permits. Two permits were issued to Noble Energy and three were issued to the Antero Resources on two separate properties.

In Ohio County, there were two permits issued to Chesapeake Appalachia on the same property.