MOUNT VERNON, Ohio — Cattle rancher and political activist Mike Callicrate has spent a lot of time fighting for what he considers fair and open markets in the beef industry.

Callicrate, who is known for inventing the Callicrate Bander used to castrate bulls, was one of the featured speakers at an event sponsored by Ohio Farmers Union Feb. 25 in Mount Vernon.

Related: OCM, NCBA at opposite ends of table

He wears many hats, but his main theme is supporting “family farmers” against industrial agriculture.

“My whole reason to get out of bed every morning is to increase income at the farm gate,” he said. “Number two is to provide a good, healthy food for people.”

According to Callicrate, grocery stores, meatpackers and large farms are pushing family farmers off the land. His organization — the Organization for Competitive Markets — fights for a “true supply-demand based competition.”

In recent years, after experiencing some setbacks with lawsuits and legislative pushback, he’s decided on a new approach: Go around the major food companies and find a direct way to the marketplace.

This has worked for Callicrate, whose company raises, slaughters and sells its own meat in Kansas and Colorado. But as an activist, he wants to see this model spread, and more of what he considers “family farmers” be put back on the land, while overcoming what he considers industrial agriculture.

Part of his new approach is becoming a partner with the animal rights organization Humane Society of the United States. Callicrate joined the HSUS farmer advisory council for Colorado in 2012, and has worked alongside the organization to “stop industrialized ag.” 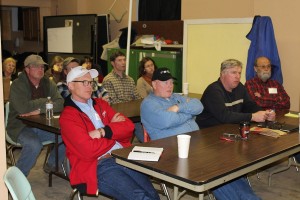 He spoke about his vision in Wooster and in Mount Vernon, alongside Missouri farmer and HSUS Vice President of Outreach Joe Maxwell.

Maxwell knows all about the concern some farmers have regarding HSUS — that it promotes Meatless Mondays, promotes reducing and replacing meat, and that it’s president, Wayne Pacelle, is a vegan.

But, he said HSUS and family farmers do have a lot in common, in terms of values and their intolerance for mistreating animals. And, Maxwell said,“family farmers” today are so badly outnumbered, they need the support.

Maxwell and his supporters got a new hope for penetrating the line when Wayne Pacelle offered them the chance to join HSUS’ state advisory councils. He said the size of the HSUS and some of their similar values, made it an attractive partner.

“It’s time for us independent producers to start looking outside of the traditional place to find support,” he said. “We have to look to consumer groups like HSUS. We have to begin to reach relationships with the environmentalists. We have to begin to build those coalitions and collaborations if we are going to win today.”