COLUMBUS — The Ohio Farm Bureau Federation met for its 95th annual meeting Dec. 5-6 in Columbus, with 346 delegates voting on what direction the Farm Bureau should take on issues effecting its members.

One of the hottest issues was a consideration to change the membership model for the OFBF.

Jack Fisher, OFBF executive vice president, told delegates current OFBF membership has plateaued at 214,000 and a new membership model has to be considered.

He said it is important to get non-farmers involved because of the country’s changing pace.

“We need society’s permission to farm. We need the dialogue and the ability to answer questions of those new to farming,” said Fisher.

He added the state Farm Bureau is operating with 30 fewer employees since 2005.

The current farm bill negotiations is just one example of why the OFBF needs a bigger membership base.

He said with a bigger coalition behind the OFBF, the more influence it can have on those creating the farm bill.

The proposal debated during the annual meeting called for two membership designations: heritage and associate members.

*Correction*: The proposal would have called for four types of membership: engaged agricultural, emerging agricultural, community members and heritage members.

Members questioned who would decide the criteria for each designation and how the dues would change under the new model. The new model would have meant less money generated for county bureaus, but more through grants that would be distributed to the county level.

Several delegates expressed their concern over who would decide what programming gets what funding and how much.

OFBF President Steve Hirsch, of Chillicothe, asked the delegates to consider how Farm Bureau would be funded 10 years from now as membership declines.

Laddie Marous, a delegate of Ashtabula County, said he believes a different membership model is necessary but wasn’t sure if this model is the way to go.

The delegates voted to create a committee to study the issue.

Another issue that was discussed was whether or not the dues for OFBF should be increased by $10 in 2015.

Sharon Graham, a Stark County delegate, said it has been 10 years since the last increase.

The motion for the $10 increase failed by a vote of 52 percent “yes” to 48 percent “no.”However, because the change in dues would have meant a change in code, a two-thirds vote would have been necessary. The motion failed.

OFBF delegates also voted on policy regarding water quality, a hot topic that is also being debated in the Ohio General Assembly.

Without voicing support of any specific legislation, delegates approved policy supporting nutrient management education programs that include certification for fertilizer applicators. Farm Bureau policy also states that Ohio should have a comprehensive reduction strategy for all nutrient sources.

Adam Sharp, OFBF vice president of public policy, explained the change was necessary because if Ohio does not take the step as a whole to require certification for fertilizer applicators, the Environmental Protection Agency will make it a requirement along with possibly other stringent requirements.

The meeting wasn’t all about debating policy. The OFBF also took time to honor those who have made an impact on agriculture through their life’s work. 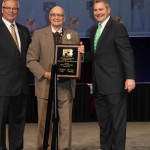 He was was named Outstanding Agriculture Teacher for the state of Ohio and also has been active with the county’s hospital governance board, the local electric cooperative and his county Farm Bureau. 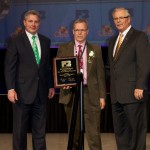 Leimbach, whose award was presented posthumously, was best known as an author and speaker who drew attention to farmers and the rural lifestyle.

Her “Country Wife” articles and other essays were syndicated nationally and she was the author of three books. A popular farm speaker, who spoke at farm events in 48 states and in Canada, Leimbach was a founding member of American Agri-Women and its Ohio affiliate. She won numerous awards including induction into the Ohio Agricultural Hall of Fame. 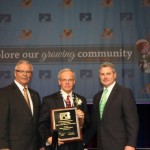 Schlenker began his career as an OSU Extension agent, but spent the majority of his professional life within the Farm Credit system, first as an account officer for the Federal Land Bank and retiring as executive vice president of Farm Credit Mid-America.

He served on numerous boards including Ohio Livestock Coalition, Ohio Ag Council, Animals for Life Foundation, and 4-H Foundation. He also provided leadership to many national cooperative organizations and is the winner of multiple industry achievement awards.

Also honored at the meeting:

• The Cooperative/Agricultural Educator Award was presented to Dr. Monte Anderson. He has been a professor and director of the agriculture department at Wilmington College since 1985. Along with administrative duties he teaches agricultural education, horticulture and agronomy.

He founded a community initiative to increase access to local produce, serves on the Clinton County OSU Extension Advisory Board and is on the Ohio FFA Foundation Board.

• The Agricultural Communicator Award was given to Gary Jackson. Jackson is a long-time farm broadcaster. He served in the farm departments at WRFD, WIMA, the Agri Broadcasting Network (ABN) and delivered daily livestock market broadcasts when he was information director for Producers Livestock Association.

Jackson currently appears on the television program In Ohio Country Today. He’s contributed to many farm group committees and has been honored by farm organizations, OSU Extension, United States Department of Agriculture and the National Association of Farm Broadcasting.