COLUMBUS — More than 7,000 members and guests attended the State FFA Convention May 1-2 at the Ohio Expo Center. And, although they were mostly dressed the same — in their blue and gold FFA jackets — each person represented a unique dream and a unique personality.

That became most clear during a speech by motivational speaker Harriet Turk, of Memphis, Tenn. She challenged the crowd to dance to various songs, including the hit Y.M.C.A. The number of ways students responded showed their diversity.

Her point was that people should be comfortable with who they are and the things that make them unique.

By “fierce,” she said students need to defend their own dreams and tell their adversaries: “This ain’t your dream!’”

If students want to be respected, they need to first learn to respect themselves and stand up for who they are.

“If you don’t stand up for yourselves, if you don’t honor and respect who you are, why should anyone else,” she said.

Turk also talked about what it takes to see a dream become a reality.

She said motivational speakers always talk about the power of “believing and achieving,” but that in reality, believing is only part of the equation. Successful people also need knowledge and skills, and must take action. But, she went a step further by admitting that even if all of those things are in place, success is still not a guarantee.

“Sometimes you’re going to follow the most beautiful action plan and you’re going to do all the right things and you’re still not going to win, and you have to learn to deal with it, because life is about balance, it’s about winning and losing,” she said.

During a second keynote speech, Perry County musician and song writer Cliff Cody talked about the years of work he has put into developing songs, and how he waited 16 years to hear his first song on the radio in 2012.

“Don’t be afraid to dream really, really big but also have the work ethic that’s going to help you reach that dream,” he said. 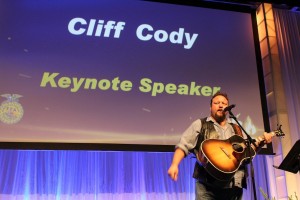 He has a daughter who will soon be in FFA and he said he looks forward to the life-lessons that FFA will teach her. He sang various Country Music songs during the convention, mostly dealing with how choices and decisions impact one’s life.

The majority of the convention, which was the 86th in Ohio, was spent recognizing contest winners, FFA supporters and proficiency achievements.

The FFA once again made significant donations to charities, totaling nearly $35,000 to Children’s Miracle Network Hospitals, and nearly $13,600 to CROP Church World Service.

He presented a $38,000 check to the Ohio FFA Association. The funding, provided by the Ohio Rural Rehabilitation fund, will support the 2014 Agricultural and Rural Community Outreach Program.

“We are proud to support a program that allows students to participate in local development projects, teaching them the value of giving back to their communities while gaining experience as agricultural leaders,” he said. “It’s an experience we hope that keeps youth interested and involved in the agriculture industry as they look towards future careers.”

Local FFA Chapters receive grant funds ranging from $750 to $2,500. This year’s grant winners will be announced later this month.