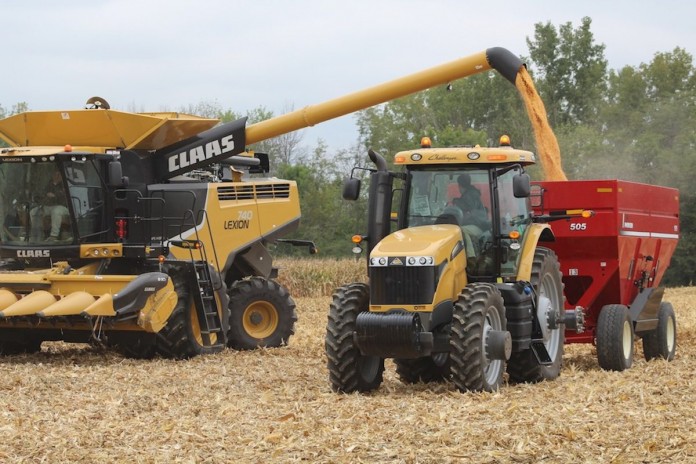 COLUMBUS —Grain farmers are well aware of the tight profit margins of 2014, which will likely continue through 2015.

But at the Ohio Grain Farmers Symposium, held Dec. 18 at the Ohio 4-H Center in Columbus, they also learned of a few wild cards that could still soften the burden.

One is the price of oil. As 2014 comes to an end, crude oil prices have fallen dramatically, now below $60 per barrel, from more than $90 per barrel in October.

A more immediate effect is that cheap oil is causing oil to win out among other fuels, including corn-based ethanol, and cellulosic ethanol.

One reason is, Roberts said, many lawmakers have changed their support for ethanol and some are now unsure how much — if any — should be required to be blended into fuel.

Mandatory blending is governed by the U.S. EPA through the Renewable Fuel Standard.

But in 2013, the EPA recommended trimming back blend amounts, and this year, as Roberts pointed out, the EPA has not yet issued its 2014 mandates. He expects those will come as late as February of 2015.

“That political consensus is gone for biofuels,” Roberts said. “(That) really limits the growth potential for that market.”

But low prices tend to correct low prices, and Roberts said crude has reached a low to where some oil rigs are going to start being pulled from production, which will cause production to slow.

He showed a chart of the costs for extracting various kinds of oil — in which nearly half are already selling for less than the cost of production.

Another issue that could improve grain farmers’ bottom line is transportation — new laws that allow larger semi trucks on the road — and improvements to infrastructure.

Mike Steenhoek, executive director of the Soy Transportation Coalition, said Congress will consider a highway bill in 2015, which among other things, would allow states to increase acceptable semi weights on interstates, from the current five-axle 80,000-pound limit, to six-axle, 97,000 pounds.

Steenhoek said contrary to popular belief, the heavier trucks would not necessarily be more dangerous. His research shows more accidents with a higher volume of trucks — not how much they weigh.

Another benefit to farmers, at least long-term, is that the Senate approved the “tax extender’s bill” in December, which increases the barge diesel tax from 20 cents per gallon, to 29 cents per gallon. The increase goes into effect in April, and will lead to an additional $36 million in revenue for barge improvement projects.

The bill awaits the president’s signature.

“That’s a very favorable development,” he said. “It’s going to result in new revenue going into the system.”

Steenhoek said a new lock costs $400 million to build, and a renovation project costs about $40 million.

Road improvements. Ground transportation faces a similar situation, Steenhoek said, with bridge and roadways that need repaired, but are often limited to the per-gallon tax that has been set.

”We have a fixed source of revenue trying to meet the needs of an escalating cost,” he said.

He said the U.S. has some of the most ideal rivers and waterways of any country, but without proper infrastructure, their use is limited.

“If you don’t have transportation, supply simply looks at demand,” he said.

An even bigger wild card, potentially, is the planned opening of the Panama Canal expansion. Steenhoeck said it will probably be 2016 before the canal is commercially available, but when it is, he expects it will open new parts of the U.S. to barge transportation and add greater efficiency to shipments going through Central America.

In his grain market forecast, Roberts said the world in general is at its most peaceful, prosperous time in human history. Diets are improving, and with those improvements come new demand and opportunity.

But he reminded producers of a Donald Rumsfeld quote, cautioning them to be mindful of the “unknown unknowns.” In recent weeks, those have included a new partnership with Cuba, a grain embargo on Russian wheat, and much more.

He said global events can shake world stability quickly, and the same to the markets.

He did not predict any major price rebounds for corn or soybeans in 2015, but on a bright note, he said prices have risen the past several days, suggesting “lows have left the market.”

He expects the markets to continue in an “upside” pattern, gaining more value, though slowly.

Lower grain prices have undoubtedly favored into livestock producers’ profits, and Roberts said the livestock feed sector is growing as a result. He doesn’t see a rapid expansion of the cattle herd, but incentives for livestock expansion are in place.