WOOSTER, Ohio — Researchers with Ohio State University are trying to bring back a specialty crop once popularly grown in Ohio and used for beer making.

Hops — one of the key ingredients in craft beers — was grown in Ohio until the early 1900s, until pressure from disease and insects caused farmers to give up growing the crop.

The resins from hops — typically dried and boiled — provide the bitterness that balances the sweetness of the malt sugars in beer making.

Today, an estimated $4 million worth of hops are imported into Ohio, with most of it coming from northwest United States — especially Washington and Oregon.

During a field day Sept. 5 in Wooster, researchers showed the public the OARDC Hop Yard Plot, which features a quarter-acre setup designed to research about 10 varieties of hops.

The rectangular-shaped plot is constructed of 20-foot wooden poles, inserted 3 feet into the ground and reinforced with wire cables. The poles are spaced in equally distant rows of about 10 feet apart — enough space for easy access and to drive a pickup truck between the rows.A trellis system provides support for the hops, which can grow as high as the posts and beyond. The root structure extends to at least 18 feet deep.

The hops at OARDC were planted May 8, and are in various stages of growth, with the better-performing varieties producing an abundance of cone-like hops. The hops are typically harvested by cutting the entire hops vine. In a commercial operation, they are cut and tossed into the back of a pickup truck — hence the need for wide row spacing.

Hops are “a growing interest among growers in the area,” said Mary Gardiner, an assistant professor in OARDC’s entomology department.While growing them is relatively easy — once a trellis is established — they’re not cheap. It’s estimated that an acre of hops would cost $10,000 for setup.

“Having a hop yard probably isn’t for everyone, especially due to the high input costs and the work required to install the trellis system,” said Chelsea Smith, a research assistant at the OARDC. “But I think it’s a great opportunity for farmers who are really interested in specialized crops.”

On the plus side, hops are a perennial crop and can grow back as many as 15 to 30 years. And, the financial returns per acre can be significant.

With these kinds of numbers, its important to get production right. That’s why the OARDC is trying to figure out the best practices. 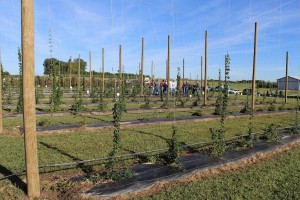 “It’s easier for us to make the mistakes,” said Brad Bergefurd, a horticulturist with OARDC.

But researchers are not blindly experimenting. They’re tying their research to economics and trying to develop a viable industry for the private sector.

“Whatever research is done, there has to be an economic factor,” Bergefurd said. “There has to be a way that us farmers can actually make some money with this.”

If Ohio’s breweries can buy more of their hops in-state, it will mean more dollars in Ohio farmers’ pockets.

“Why should we be sending all of this money out of Ohio to pay for hops coming out of Oregon and Washington,” Bergefurd asked.

Hops are also being grown at the southern Ohio OARDC campus in Piketon. The yield and flavor of the hops from the two plots will be compared, to see what differences may result from the different locations. Piketon is located in southcentral Ohio and is about three hours south of Wooster.

As the Ohio brewing industry continues to expand, so does the market opportunity for hops. The Ohio Department of Liquor Control handed out more alcohol-manufacturing permits in the first six months of 2011 than it did in all of 2010, a trend that continues.

The grant for the OARDC project was valued at about $140,000. In addition to growing hops for research, staff are looking at how they  can survey the state to determine the number of microbreweries, and get a better feel for demand.

The Ohio Department of Commerce has permits for 96 A-1 breweries in Ohio, with at least a dozen pending.

Recently, a new class of permit was designed for breweries that manufacture no more than 31 million gallons of beer per year, known as the A-1C permit. Most that qualify as a smaller brewery are converting to the small-brewer permit.But there’s much more data that could be gathered, including in-home breweries. The information would be valuable to potential growers. 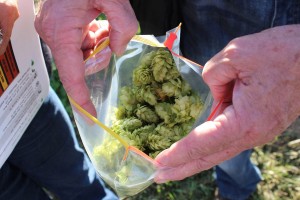 In addition to keeping money in the state, hops are another way producers and consumers can take part in the local foods movement — albeit “local beer.”

He brought a plastic bag of hops to the field day and said the potential for Ohio-grown hops is “excellent.”

Interesting facts: Ohio currently spends an estimated $4 million to import hops from northwestern states.Sales of craft beers have grown from 3.8 percent to 5.7 percent of the beer volume share.The OARDC plot should produce a yield of 500-2,200 pounds per acre, valued at $7,000-$30,800 following the first year of production. Growers can surpass the costs of trellis construction within 1-2 years.

Vines can grow up to a foot per day and continue to grow until mid-July. They need a moderate supply of water, usually every three-four days.Cones should be dried after harvest. The goal of drying is to remove the moisture while preserving the lupulin (inner gland).

Good air flow, heat and low humidity will help dry the hops, but the temperature should not exceed 140 degrees.

Building an oast is necessary for large crops of hops. Dried hops should be vacuum sealed and frozen until use.