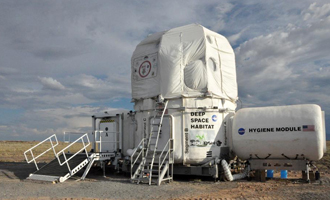 WOOSTER, Ohio — Say you are on Mars and fancy a salad. Unless the Curiosity rover can make an unexpected find of fresh romaine somewhere on the dusty Red Planet, you are looking at a nine-month trip to the nearest produce aisle on Earth.

A better option? Grow the salad yourself. That’s exactly the approach NASA is taking as it plans for future manned expeditions to places like the moon or Mars, where food availability will be a significant challenge.

Joining this mission is a team of Ohio State University researchers and students who are helping NASA figure out the best way to grow food aboard space exploration units. The team, from the university’s Department of Food, Agricultural and Biological Engineering (FABE), designed and built a food-production system for NASA’s Deep Space Habitat (DSH) — a space module with living quarters, workspaces and laboratories that is expected to enable human exploration in faraway environments.

“Our system is automated so that the crew doesn’t have to spend too much time taking care of the plants,” said Peter Ling, an associate professor in FABE and faculty adviser in the project.

“The system controls irrigation and monitors plant temperature and health. At the bottom of the unit there is a weight plate that detects water leakage and water loss by plants, and also estimates growth.

“The idea is that this unit will one day be a regenerative life-support system not just for growing food, but also for purifying the air, producing oxygen and cleaning wastewater.”

The system was developed as part of NASA’s 2011-2012 eXploration Habitat (X-Hab) Academic Innovation Challenge. The program provides grants to university teams to design and produce functional products of interest to the DSH project.

Ohio State’s proposal was accepted and funded in June 2011, and the prototype was delivered and demonstrated at Houston’s Johnson Space Center in July 2012.

The food-production system is small because of space constraints in the DSH. It consists of an 11- by 18-inch metal plate topped by a plastic plant growth tray — outfitted with a watering tube, computer-controlled valves and a variety of sensors to monitor growing conditions.

A total of eight of these plates can fit in the DSH’s circular plant atrium area, which is located between the module’s first and second levels. Because soil is too heavy to carry into space, plants — small vegetables such as lettuce, herbs and radishes — grow in a nutrient solution, like in a hydroponic system.

“Food production will become a critical component of a life-support system as longer-duration missions take astronauts off Earth and make resupply of consumables more challenging,” said Gioia Massa, a postdoctoral fellow in NASA’s Surface Systems Division. “Launching food into space is expensive, but seeds are small and have a low mass, so producing food will become more cost-effective over long durations and distances.

“In addition, growing plants will also help recycle the atmosphere and provide psychological benefits for a crew, both as living organisms and as fresh produce.”

“It was awesome to go to Houston and see the NASA facilities and the projects they are working on,” said Henry Boucherle, a biological engineering major from Avon Lake, Ohio, who graduated last June. “We learned a lot of things that expanded our education beyond classroom experience. We had meetings with NASA, learning about their expectations and making decisions that were best for them and the project. It’s great to know that I contributed to something NASA will try to make work and use.”

NASA tested the Ohio State system and many other DSH technologies from Sept. 10-21 at Johnson Space Center, Massa said.

A crew of four is living and working in the habitat, communicating with a mission control center and simulating a deep-space mission. The crew is comparing low-tech, manual plant-production systems with the automated Ohio State system.

“We have three different types of lettuce, an Asian salad green and two types of radishes growing in the plant atrium,” she said. “The OSU system will grow ‘Outredgeous’ lettuce, a red leaf lettuce that not only tastes great but could provide important antioxidants for the crew.”

Ohio Department of Agriculture changes H2Ohio deadline back to March 31