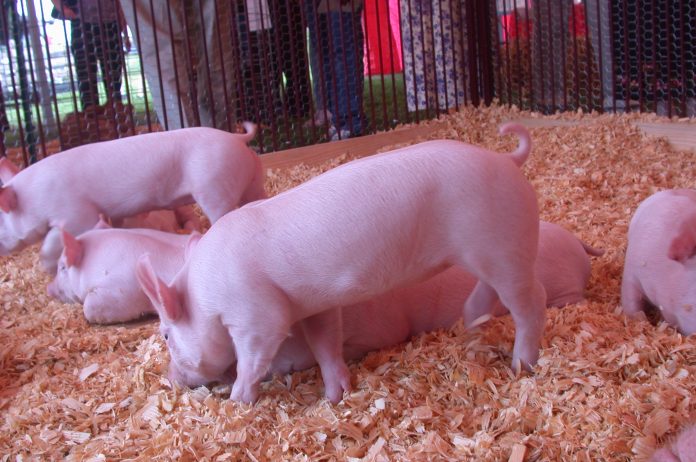 SALEM, Ohio — 4-H’ers who show swine projects at some Ohio fairs will have to read the ingredient lists for their feed carefully this year.

The Ohio Pork Council announced Feb. 6 that all hogs shown at the Ohio State Fair this year are required to be free of ractopamine, a product sold under names including “Paylean” and “Engain.”

The product is approved by the U.S. Food and Drug Administration, and is used in feed to increase hogs’ lean growth rates. The new requirement is not related to health risks, but to trade.

Ractopamine is a synthetically-created additive that encourages lean muscle gain and growth rate.

“The product is fully legal and safe when fed according to label directions,” said Steven Moeller, swine extension specialist with Ohio State University.

Some international markets, however, have restricted the product. In response, much of the U.S. pork packing industry has made ractopamine-free swine production another market specification.

That decision trickled down to the state and county levels when the Ohio State Fair decided to require that all pigs exhibited at the fair be ractopamine-free, and the Columbiana County Fair followed suit.

State fair officials made the decision in order to have access to packers as potential buyers at the fair.

China is the primary country that restricts ractopamine, Moeller said. It tests pork from other countries, as part of its import process.

“That is a function of their internal concerns about the product,” Moeller said, noting that some countries consume by-products and organs from pigs that most people in the U.S. do not consume. Ractopamine can be found at a higher level in those organs.

Moeller said that about 25% of the value in the pork industry comes from export markets. At this point, most major U.S. packers have announced either that their products are ractopamine-free, or that they are moving in that direction in order to keep access to export markets.

“It is absolutely a market access decision,” said Moeller. “Our goal is to put the pigs into the standard market for pigs in the US, the standard commercial market, at a value that represents the same type of pork and the quality of pork and the safety of pork that we expect from every producer in the country.”

To be ractopamine-free, a pig cannot be fed or exposed to the ingredient at any point in its life — from birth, to the market.

“That starts basically at the feed mill,” Moeller said.

To avoid cross-contamination, some feed mills have had to thoroughly clean grinders, mixers, storage areas and delivery trucks to avoid any residue from feeds containing ractopamine.

The council said state pig exhibitors should disinfect feeders, barns and trailers that may have been contaminated by the ingredient in addition to working with feed suppliers to make sure the feed they use is ractopamine-free.

Since ractopamine can also be used for cattle, Moeller said environments that contained cattle who may have consumed ractopamine, including show rings, barns and trailers, should be cleaned thoroughly.

Moeller noted that all feed suppliers, regardless of size, are required to label products with ractopamine, and should know how to avoid cross contamination at their mills.

“Buying that feed should not be an issue,” he said.

Some county fairs have also decided to ban the ingredient. The Columbiana County Junior Fair released a letter on its Facebook page stating it planned to follow in the Ohio State Fair’s footsteps.

“Agriculture, being a consumer-driven industry, must recognize the wants of the customer, and deliver on what they can,” the letter read.

County fairs, however, are not required to follow suit, Moeller said.

See the end of the article for a list of Ohio county fairs that have decided to ban ractopamine for hogs for 2020.

“The reason that the Ohio State Fair ultimately went this route was … they need to be able to have a market for roughly 800 pigs annually,” Moeller said.

Smaller county fairs, especially those who know that all of their pigs are harvested locally and not destined for international markets, may decide to continue allowing ractopamine. Any 4-H’ers who plan to show at both a county fair and the state fair, however, should take care to avoid cross contamination.

Exhibitors, or their parents or guardians, at the Ohio State Fair and Columbiana County Fair will have to sign an document stating that their pigs have not been fed or exposed to ractopamine.

The county fair noted that packers who buy hogs can have the pigs tested, if they choose, and if a pig tests positive for ractopamine, the 4-H’er will forfeit all awards and premiums for that project.

Moeller said he has not heard of any other state fairs going ractopamine-free specifically, but some have non-terminal hog shows and send the pigs home. Iowa has decided to send pigs to an alternative market for less monetary value for this year, he said.

County fairs in the area that have banned ractopamine include: