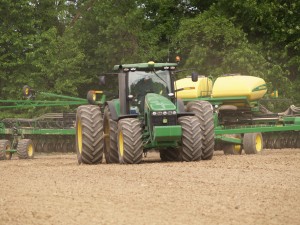 HARRISBURG, Pa. — Farmers in Pennsylvania appear on their way to new transportation regulations that will better serve their needs with large farm equipment.

The state’s General Assembly approved legislation mid-October that will increase the width allowance of farm equipment that can be transported by up to 16 feet.

The legislation is titled Senate Bill 390, and House Bills 2371 and 2372. Pennsylvania Farm Bureau Federation praised the progress and encourages Gov. Corbett to sign the bills into law.

Over the years, farm equipment has grown in size and structure exponentially, requiring more space on the roadways.

“The long overdue changes to the code regulating farm trucks are needed, because farmers are traveling longer distances to plant and harvest crops on farmland they own and rent,” said PFB President Carl T. Shaffer. “They also are required to travel longer distances to deliver agricultural products or to reach businesses that sell farming supplies.”

The farm bureau noted the changes to the vehicle code will also carry “additional precautions” by farmers, who will be transporting larger pieces of equipment.

“Farmers are committed to maintaining safety on Pennsylvania’s roadways and welcome the opportunity to increase safety measures to further protect drivers and passengers in other vehicles by installing extra lighting or using pilot vehicles,” Shaffer said.

Magee Marsh is a haven for hundreds of species of birds