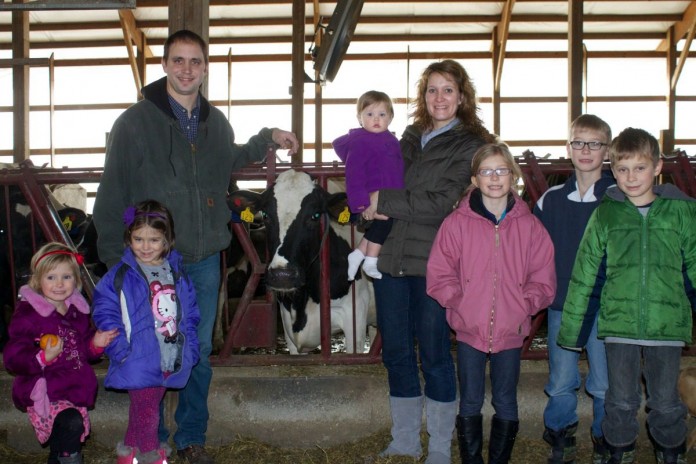 Some would say it is daunting to even think about it.

But Randy Pero and his wife, Kristy, say it’s a life they wouldn’t trade for anything.

After all, their love story started when they were showing hogs at the Stark County Fair.

Several years and six children later —  Rudy, 10, Klara, 8, Reid, 7, Kynsie, 5, Kora, 3 and Kiersyn, 14 months — Randy and Kristy are working to keep the family farm for the next generation.

In between taking care of the children and helping with the milking, Kristy works as an elementary teacher in East Canton schools. 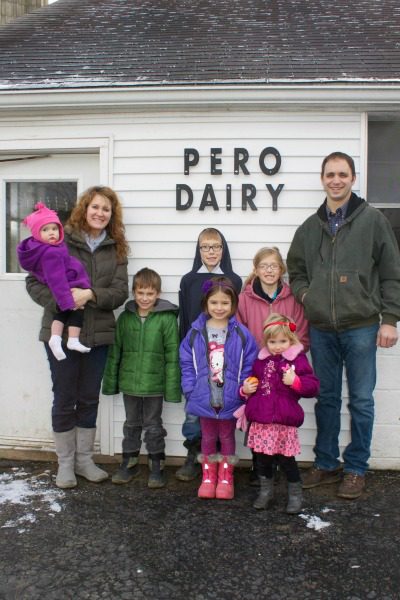 Randy is the third generation to live and operate the Stark County farm near East Canton that has been in the Pero family since 1950.

The couple took over the farm in January 2010 when Randy’s parents, Richard and Susan retired. Randy’s grandfather, Robert, still lives across the street from the dairy barn.

Randy went to work right away to increase the herd size. Like each generation before him, he doubled cow numbers, going from 65 to 125 cows.

In addition to family and farming responsibilities, Randy tries to juggle community service into his schedule to stay connected to what is happening in the community. He is a member of the Tri-County Dairy Producers’ board, the Stark Soil and Water Conservation District board and was elected to the East Canton school board in November 2013.

After the couple did took over the farm, they built a freestall barn in 2011, and constructed a new manure pit.

The couple is always working to keep their somatic cell count low, which helps to ensure quality milk is produced.

They use sand bedding to increase cow comfort and cleanliness, and there’s a constant supply of water to the cattle in the barn. Randy said the barn is spring fed, and the water never freezes. Even if the power goes out, the barn still has a water supply from the spring that has been in use for the past 22 years.

The setup includes a double six parallel milking parlor, and one person can handle the milkings twice a day. Each cow wears identification around her neck that records data like milk weights about each cow.

Randy and Kristy agree that one of their goals is good farm management. They said they work to keep their animals clean and provide the highest quality forages possible.

“Someone told me once if you take care of the cows, they will take care of you,” said Randy.
He said he believes in his Holstein herd and couldn’t imagine another breed on his farm.

“It’s the only breed I’ve ever known,” said Randy. 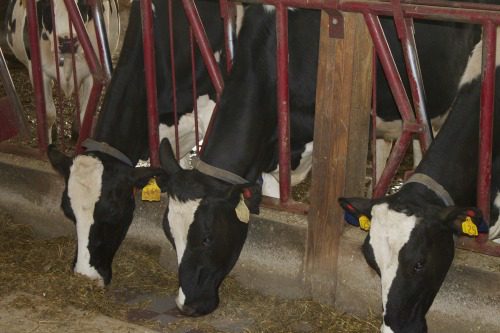 The milk produced goes to the Smith Dairy in Orrville.

Beyond the cattle, the family also works to use good management practices in the fields.

Randy raises corn, alfalfa, wheat and Sudex (a plant that looks like corn and is like it, but has to be cut every 30 days). Anything that is beyond what the farm can use, is marketed.

He said they no-till everything they can and only plow when needed.

The farm also uses cover crops on the fields in the fall. He plants rye, which is then used for bale forage in the spring for heifers.

The Peros also try not to haul any more manure than necessary when the ground is frozen, to avoid runoff. The farm has a six-month manure storage tank.

Randy said he has little problems with erosion right now, but plants contour strips because many of the hills are steep.

The 2012 drought has been one of the farm’s biggest challenges. The corn crop produced only 75 bushels per acre, which isn’t terrible, but made making a livelihood from farming difficult. Randy had to rely on crop insurance to keep the farm afloat.

Randy worked off the farm in the heating and cooling industry for a few years after high school, but returned in 2001 and worked for his parents full-time.

He said working off the farm provided him with some insight into himself. He learned he likes to be his own boss and to work with animals.

Now, Randy can’t imagine his life without the farm. He likes the challenge of growing better crops every year and his ultimate goal is to helps his cattle produce the most milk possible. He gives credit to his part-time employees and his family for making it work.

Both Kristy and Randy say their parents provide a lot of support for them and they couldn’t farm without it.

Randy’s father, helps him out in the field and his mom is often willing to help with parts running when equipment breaks down.

The farm has two part -time employees who help with the milking and one part-time worker on the weekends.

“It’s hard work, but it’s a good life,” said Randy. “Not everyone can do it. It’s terrible hours at times and lots of sacrifices.”

Having his kids help him on the farm helps keep him going, and he hopes one of them, or all of them, takes over the farm in the future.