CHESTER, W.Va. — Chuck Glenn hates mud. Hates it! And he’s not afraid to tell you.

That is one reason why Glenn started concentrating on conservation efforts on his farm in Hancock County, West Virginia. That work paid off as his farm, the Glenn Family Farm, was named runner-up as the Area II Farm of the Year in the Northern Panhandle Conservation District in 2014.

Glenn took over the operation of the farm with his wife, Cheryl, after his father, Donald Glenn, died in 2011. His mother, Betty Glenn, is still a part of the farm. His grandfather, W.C. Huff, started the farm in 1955 as a dairy, which was discontinued in 1989. Glenn said his dad had his eye on the beef business and started raising beef before deciding to get out of the dairy business. 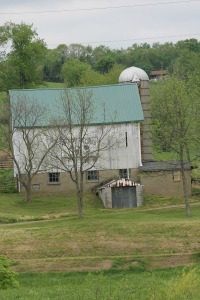 He added that it was his dad who got the family interested in conservation practices. Donald Glenn began working with the Northern Panhandle Conservation District to complete one of the first projects on the farm, spring-fed water troughs.

Now, years later, Glenn and his wife are continuing the tradition of conservation and stewardship. Glenn said after his dad died, he needed help with some conservation projects and he went straight to where he knew he could get help: the Northern Panhandle Conservation District. 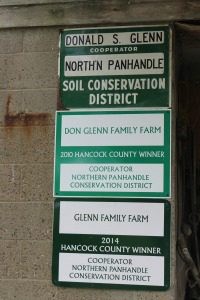 He said they provided the knowledge he needed as well as some hands-on and technical information that he needed to know about the land on his farm.

The division fencing helps him with the rotational grazing program he uses to raise his beef cattle. For example, in addition to the rotations, the feeders are kept in a separate pasture from the brood cows.

Glenn said he runs about 35 head of mixed breed beef cattle on his farm a year and he sells between 10-12 of them annually for freezer beef. He said his cattle herd has a blend of Holsteins (the genetics left behind by some of the dairy cattle), Longhorn cattle, Limousin and Red Angus.

He likes the mixed genetics, which seems to bring out the best characteristics of each individual breed. He said the cattle are laid back, good mothers, easy to calve and are good milkers.

Glenn added his bull also brings genetics to the table that help make the herd profitable. The bull, half Murray Grey and half Polled Hereford, helps ensure easy calving and helps the calves get to their feet quickly once they hit the ground.

He doesn’t raise grain but he does purchase some for the cattle in order to make handling them a little easier. 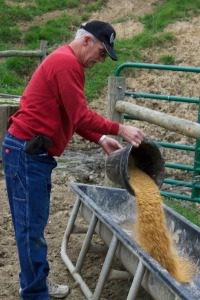 Instead, Glenn focuses on producing hay. He uses the ground that isn’t used on the farm for pasture for hay fields. He also works with the conservation district to ensure he is producing the best quality hay he can by having the soil tested yearly and using their suggestions on lime and fertilizer in order to make it grow.

Glenn said he has more sales than he can keep up with on the farm. He said the farm could handle 40 cows, but with his full-time, off-the-farm job at Penn Power in Shippingport, Pa., that is just too much for him and his wife to handle.

Beside the fencing projects, Glenn has other conservation plans for the farm, like trying to prevent those early spring-fed watering troughs from becoming mud pits.

So another project on the immediate list is building cement pads around the watering troughs. When the troughs were installed, the standard practice didn’t include cement. Now it does, and Glenn wants to update the practice and ensure what is best for the waterways on the farm.

Glenn said another project he would like to build is a heavy-use, high use pad. He thinks it would be better for handling the cattle and loading them for the cattle hauler. It will also make it better for feeding the cattle. He said without the Northern Panhandle Conservation District, he would struggle with the high use pad installation, but because of the technical help they provide, it ensures that it will have the best design for his individual farm.

Glenn said the beef business has been successful because he has found many consumers want to know where their beef comes from, and they want a face with it. In addition, he finds that his customers want a lean meat and they want a local food.

He has customers driving from as far away as the east side of Pittsburgh to get his beef. He operates on an honor system. “That’s the way my dad did it, and we’ve never been stuck.”

“I have good customers. I think my cutter is a big part of it,”

One thing is clear, Glenn is not afraid to admit he would not be able to keep the farm going without his wife at his side.

“I couldn’t do this without my wife. She is the best. She rakes all the hay,” said Glenn. He said it is definitely a team effort on the farm for them. She helps haul the hay to Glenn so it can be wrapped. And she isn’t afraid of manual labor, which Glenn said makes it a great team.

“She is a fence-building machine,” said Glenn.