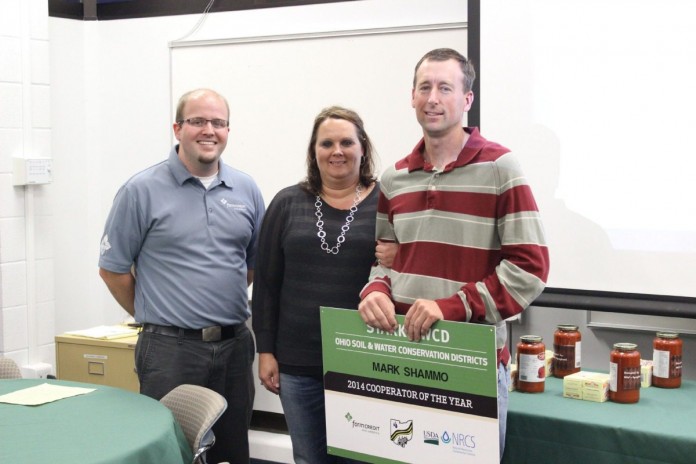 MASSILLON, Ohio — Board of supervisors elections, the naming of the SWCD Cooperator of the Year and the outlining of 2015 programs topped the agenda at the Stark Soil and Water Conservation District’s 64th annual banquet Oct. 16 at R.G. Drage Career Technical Institute.

Mark Shammo and his wife, Cary, of Shammo Farms in Louisville, were named the Stark SWCD 2014 Cooperator of the Year.

The Shammo farm has been in operation for 73 years, since Mark’s father, Ray, was 5 years old.

The family, including the couple’s children Jacob and Hanna, farms 150 acres of corn, soybeans, wheat, and hay and rents out an additional 350 acres. The Shammos also raise 75 head of beef cattle.

Brookbank added that Ray Shammo, a former Stark SWCD board supervisor, remains “a big help around the farm.”

Mark Shammo said it is an honor to be recognized for the efforts the family has put forth — efforts Ray Shammo said his son was “born into.”

“We had erosion problems that needed addressed and we fixed them,” Mark Shammo said of early conservation efforts on the farm. “And as time has gone on, with more erratic weather, if you don’t address these things they are going to be a big problem.”

Scott Briggs, chairman of the Stark SWCD board of supervisors, said the district looks for farms that go above and beyond with conservation efforts in areas such as erosion control and nutrient management.

“And (the Shammos) have not only done this on the acres they own, but they have put a lot of money into the property they rent,” Briggs said.

Other district projects. Stark SWCD Administrator Amanda Crawford pointed to the district’s new website and social media efforts; its partnerships with the Ohio Farm Bureau, OSU Extension, and R.G. Drage; and outreach through elementary school programs as highlights of the district’s 2014 programming.

Crawford said next year’s focus will include even more community outreach, with the development of an advisory committee. This effort will include a community survey, expected to be mailed within the next two months, to better determine which services, resources and workshops residents would like to see.

Crawford also announced that a Stark SWCD open house will be held in early 2015, where the year’s events and program expansions will be discussed.

Briggs, a 48-year resident who farms 350 acres of corn, beans and hay in East Sparta, was re-elected to the board of supervisors, along with and fellow incumbent supervisor Jim Halter, a corn, soybean, alfalfa and wheat farmer for the past 50 years.