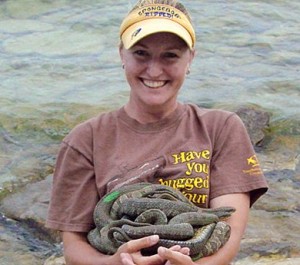 ABOVE: Lake Erie researcher Kristin Stanford recently won the 2012 Wildlife Diversity Conservation Award at this year’s Wildlife Diversity Conference in Columbus. Now an outreach and education coordinator at the Stone Laboratory, in 2006 she drew the attention of a national audience when she appeared on Discovery Channel’s Dirty Jobs with Mike Rowe.

While a graduate student at Northern Illinois University (NIU), Stanford worked with garter snakes and was asked by her mentor, Richard King, a long-time NIU watersnake researcher, to continue her research and relocate to the Erie Islands.

After earning a master’s degree from NIU in the summer of 2002, she remained on staff as a full-time research associate, funded by ODNR’s Division of Wildlife and the U.S. Fish and Wildlife Service (USFWS).

Stanford will soon earn her doctoral degree from NIU in the same area of study.

In 2006 she drew the attention of a national audience when she appeared on Discovery Channel’s Dirty Jobs with Mike Rowe.

Last year, The Ohio State University (OSU) hired her as an outreach and education coordinator at the Stone Laboratory. She will plan herpetology sessions, which provides students the opportunity to get up close and personal with the lake’s snakes and amphibians.

Stanford is involved in other snake-related efforts, including a review of the status and distribution of the Eastern foxsnake in Ohio; conducting a population viability analysis of the Plains gartersnake; serving on the Division of Wildlife’s conservation team; teaching a one-week field herpetology course at Stone Lab; and annually supervising several students in Stone Lab’s Research Experience for Undergraduates Program.

King and Stanford were also among 18 recipients of the 2011 USFWS’s Recovery Champions awards.