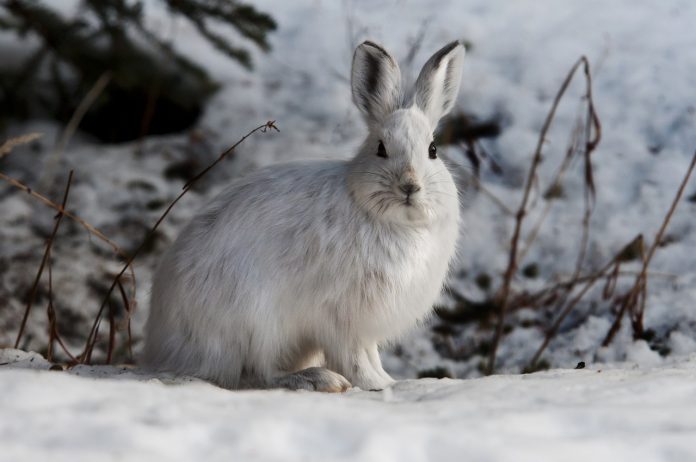 UNIVERSITY PARK, Pa. — Snowshoe hares in Pennsylvania, at the southern end of the species’ range, show adaptations in fur color and characteristics, behavior and metabolism, to enable them to survive in less wintry conditions than their far northern relatives, according to a team of researchers in Penn State’s College of Agricultural Sciences.

These evolved, organic survival strategies, they say, suggest snowshoe hares possess at least a limited ability to adjust to a warming climate.

Understanding adaptations of non-hibernating mammals to cope with extreme cold and snow, and then, the lack of those conditions is important because climate-induced changes in winter temperatures and snow cover are predicted to become more pronounced in the future, noted team member Duane Diefenbach, adjunct professor of wildlife ecology.

Animals living in the Arctic and Boreal regions, especially those adapted to survive harsh winters, are particularly vulnerable because these regions are experiencing the greatest changes in winter conditions, said Diefenbach, leader of the Pennsylvania Cooperative Fish and Wildlife Research Unit at Penn State.

“Understanding how a species has adapted to the different winter temperatures experienced across their range can offer insight into how a species might respond to future changes in winter conditions,” he said.

Diefenbach’s team have documented striking examples of that variability. They compared winter coat characteristics and heat production of snowshoe hares in Pennsylvania’s Pocono Mountains, Monroe County, to hares in Canada’s Yukon, in the southwestern Kluane region, to investigate how hares might respond to changing environmental conditions.

The study also investigated how hares in Pennsylvania altered movement rates and resting-spot selection to cope with variable winter temperatures.

To accomplish the analysis, data from a study of Yukon snowshoe hares collected in 2007 by research team member Michael Sheriff, assistant professor of mammalogy and ecology, was contrasted with information collected from 70 Pennsylvania hares trapped in 2014-15 by lead researcher Laura Gigliotti.

Some were fitted with radio collars that monitored location, movement and animal temperatures.

The researchers discovered that hares in Pennsylvania had shorter, less-dense and less-white winter coats than their northern counterparts, suggesting lower coat insulation. Hares in the southern population had lower coat temperatures, indicating that they produced less heat than those in the northern population.

In addition, hares in Pennsylvania did not select for resting spots that offered thermal advantages, instead selecting locations offering obstruction from predators.

Hare-movement rates were related to air temperature, with the smallest movements occurring at the lower and upper range of observed ambient temperatures — the animals did not move much in winter when it was very cold or very warm.

Snowshoe hares are ideal to investigate the potential for species to alter winter adaptations in response to climate change, explained Gigliotti, because unlike other small mammals that hibernate, group huddle, or use nests as means of coping with cold temperatures, hares remain active on the surface throughout winter.

And they are active at night when temperatures are typically the lowest.

“Snowshoe hares also have well-documented morphological and physiological adaptations to cope with winter, such as an increase in fur density — in addition to their coat color change — and a low metabolic rate,” she said. “Hares also have a broad geographic range, which permits comparison of winter adaptations from populations that experience very different conditions.”

Pennsylvania hares were, on average, significantly larger than hares in the Yukon, Gigliotti pointed out, and to their surprise, researchers found specimens that did not completely molt, or change coloration from brown to white, in the winter.

That development, of course, helps hares camouflage and elude predators in winters with scant snowfall.

“We trapped three hares in January that were almost completely brown, and it’s the first time that has been recorded in eastern North America,” she said. “There are hare populations in the Cascades in Washington that don’t molt completely, but that had not been documented elsewhere.”

Researchers, right now, can only speculate over what time scale Pennsylvania snowshoe hares’ adaptations to warmer winters have occurred, and they don’t know, yet, whether genetic modifications are triggering the changes.

But, in tandem, the adaptations may allow hares to survive warming long term, Gigliotti hopes.

“Our results indicate that snowshoe hares may be able to adapt to future climate conditions via changes in pelage characteristics, metabolism and behavior,” said Gigliotti. “Unfortunately, we don’t know if they can adapt as quickly as climate change is occurring.”