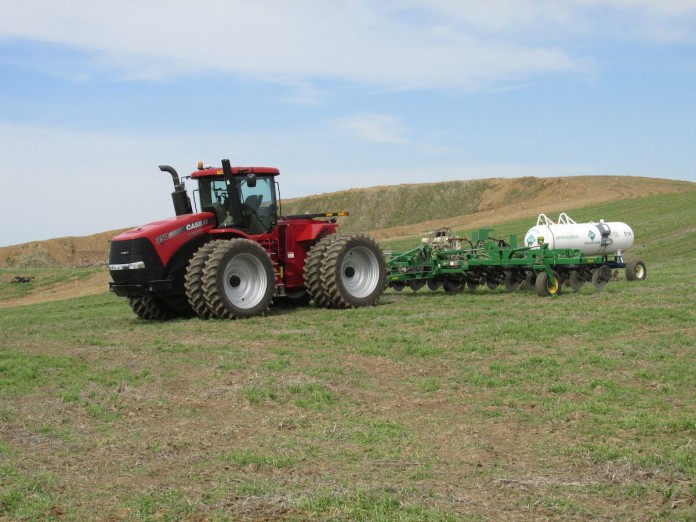 COLUMBUS, Ohio – Despite the wet conditions that have affected many Ohio corn fields so far this season, growers who haven’t started planting shouldn’t be concerned yet, said Peter Thomison, an OSU Extension agronomist.

“I’m really not surprised that we’re not seeing more corn planted,” said Thomison. “We’ve had a wet April so far but in previous planting seasons we’ve experienced wet Aprils with conditions then turning warmer and dry and growers able to get planting done normally.

“This early rain pattern is not at all unusual. Conditions could be better, but there really is no need for concern yet.”

There were .9 days suitable for fieldwork in Ohio during the week ending April 13, the federal agriculture agency said.

“While warmer temperatures dried the soil some, it was still too wet for most producers to do any field work,” it said in a statement. “Some areas are still flooded from snowmelt and rain.”

Historically, the optimal time to get corn planted in southern Ohio is between April 10 and May 10 and in northern Ohio between April 15 and May 10. While growers who follow those planting dates generally see optimal yields, growers who don’t find optimal planting conditions may want to hold off, particularly if the forecast calls for continued wet weather, Thomison said.

“We encourage planting at the recommended times because this is historically when you get the best yields,” Thomison said. “Planting later than these times historically has resulted in yield loss, in some cases a 30-bushel-per-acre reduction in yield.

“Growers historically could see a yield loss of a bushel to a bushel and a half for each late planted day,” he continued. “But if the conditions aren’t right, growers don’t need to rush in and mud their corn just for the sake of planting early.”

Over the past 15 years, data shows that in most years, even those with slow starts due to persistent cold weather in April, 60 percent or more of corn acres were planted by May 10, which is within the optimal planting date window.

Wet weather conditions caused planting delays for many growers in 2011. However, many growers were still able to produce crops with good yields and, in some cases, better yields than average, Thomison said.

But the generic recommendations are that if growers have fields that have good soil conditions, are dry, well drained and suitable for planting, with warming temperatures over the first couple of weeks of April, growers can start planting within the recommended dates, he said.