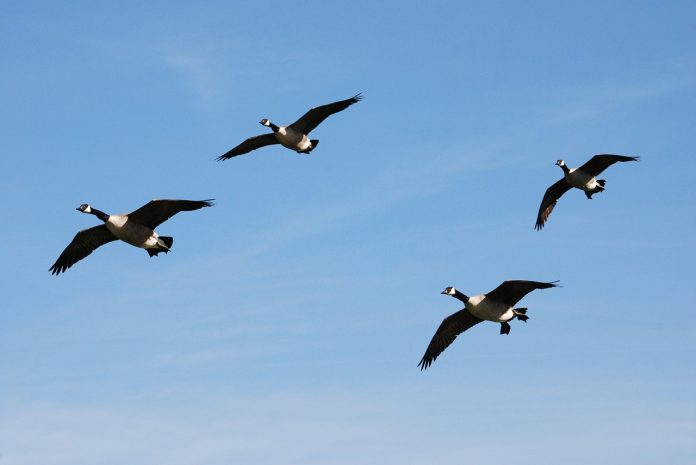 LAUREL, Md. — For the first time, scientists have tracked the movement of a wild bird known to be infected with highly pathogenic avian influenza in North America. The new research, led by the U.S. Geological Survey, can help improve estimates of when and where the virus could spread in the environment and to other birds.

The researchers did not know the bird — a lesser scaup in the Chesapeake Bay area of Maryland — was infected with avian influenza when they released it back into the wild. The bird did not show signs of infection during observation and was not originally captured for avian influenza research. A swab test taken as an adjunct to the main research came back more than a week later indicating that the bird was infected.

The scientists found the movement patterns of the infected lesser scaup were noticeably different from noninfected birds, moving shorter distances in similar time frames. Officials can use these findings as they develop disease mitigation strategies such as surveillance programs to track wild birds and the occurrence of avian influenza.

The USGS worked with the University of Delaware, Maryland Department of Natural Resources, U.S. Fish and Wildlife Service, University of Georgia and Ducks Unlimited, leveraging their ongoing avian ecology research.

In the current outbreak, which began in December 2021, wild birds across more than 40 states have tested positive for highly pathogenic avian influenza, with different species experiencing varying reactions from no symptoms to mortality. The outbreak is affecting domestic poultry as well, with confirmed cases in commercial and backyard flocks across 43 states, according to the U.S. Department of Agriculture.

While the current outbreak is ongoing and the economic and ecological effects are still unknown, an outbreak of avian influenza in poultry facilities from 2014 to 2015 resulted in the loss of 50 million chickens and turkeys and cost the economy approximately $879 million dollars, according to previous research.

Although avian influenza viruses usually do not infect people, there have been some rare cases of human infection, including a single case in the U.S. linked to the current outbreak, according to the Centers for Disease Control and Prevention.

USGS scientists also identified four instances when the infected bird had close contact with noninfected birds being tracked at the same time. This indicates that despite reduced movements, there were still opportunities for potential transmission either from bird to bird or potentially from the environment the bird used.

Transmission of avian influenza viruses commonly occur through direct interaction or fecal contaminated water. USGS research has shown that these viruses can remain infectious in settings such as wetlands for several months depending on environmental conditions.

The infected bird in this newly published research was one of 25 lesser scaup being studied by the University of Delaware and Maryland Department of Natural Resources for a separate ecology project. The USGS asked that all the birds in that project be tested for avian influenza since they were already in the care of scientists. Only one bird tested positive for an active infection while the others tested negative.

The collaboration was an opportunity to leverage resources and acquire more data for several research purposes.

While large-scale mortality events of lesser scaup have not been observed in the Chesapeake Bay region, a mortality event occurred in Florida early in the current outbreak. Lesser scaup are a type of diving duck and known carrier of avian influenza viruses, as supported by previous research co-authored by the USGS.

The USGS has completed and is currently involved in several other research projects to better understand the spread of avian influenza. Learn more by visiting the USGS avian influenza website. The study was published in the journal Transboundary and Emerging Diseases.