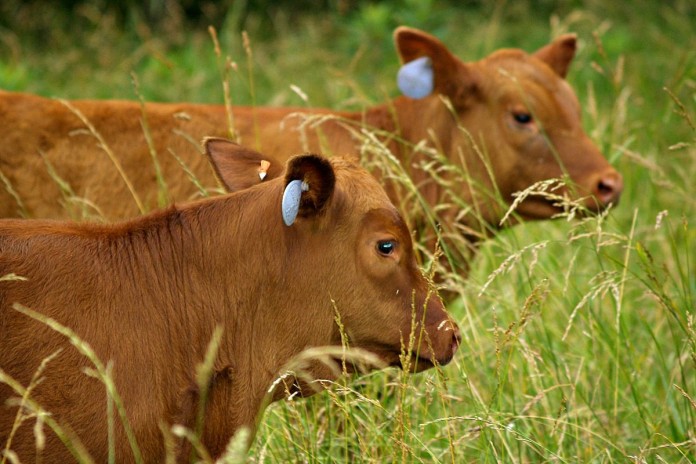 WASHINGTON — The number of cattle in the United States has fallen dramatically, but just how much may surprise you.

As of July 1, there were 95 million head of cattle on U.S. farms, according to the cattle report published July 25 by the USDA’s National Agricultural Statistics Service.

It’s the lowest inventory for July 1 since the series began in 1973.

Keith Burgett, an Angus producer in Carroll County, said the low inventory is directly related to the long-term drought in Oklahoma, Texas and Kansas.

“The herds have lost so many brood cows. There was nothing for them to eat out there,” he said.

Burgett said the low cattle inventory is not just here in the United States, but across the globe.

He said some economists are concerned about higher beef prices and the demand, but so far the higher cost in the grocery aisles hasn’t hurt demand.

John Grimes, OSU Extension beef coordinator and beef producer, said the cattle herd is not only the smallest since the NASS report began, but the herd is the lowest it has been in 60 years.

He agreed the low cattle numbers are partly due to drought, but he also believes it is partly due to producers’ advancing age and the high grain prices most livestock producers experienced a couple of years ago. Grimes said when grain prices were high, producers lost a lot of forage acres that switched to corn and soybean production. He said he doesn’t know if the forage acreage will ever return.

The 2012 Ag Census reported the cattle herd in Ohio dropped from the previous census, but Ohio still ranks in the middle of the pack for cattle production.

They both believe ranchers in the western United States are working on rebuilding their herds, but they depend on moisture and for parts of the West, that is still a premium.

However, cattle have a long turn-around time. Grimes said it will take 1,200 days for a cattle producers to get something from a heifer that is kept as a replacement heifer and produce offspring. He said beef cattle have a 283-day gestation period, followed by 730 days for the calf to grow and then seven months before the calf is ready for the market or to join the herd.

The limited supply and U.S. beef exports, which account for 10 percent of the beef produced in the U.S., are keeping demand solid  for beef products.

As a result, producers in the Corn Belt region are experiencing record prices for all classes of cattle.

“Any class of cattle is seeing record prices,” said Grimes.

He added that even cull cows are seeing high prices. For example, a cull cow recently brought $1.25 per hundredweight, or around $1,800.

He said he expects cattle prices to be high for the next three or four years.

Other findings in the NASS report were:
The 2014 calf crop is expected to be 33.6 million, of which 24.3 million were born during the first half of the year and 9.3 million are expected to be born in the last six months of 2014.

With tighter cattle supplies and historic cattle prices, all cattle on feed decreased to 11.6 million, down 6 percent from 2012. (Faced with budget reduction in fiscal year 2013, NASS discontinued the July 2013 edition of the cattle report.)

Of the 95 million cattle and calves, 39 million were all cows and heifers that have calved. Of the 39 million cows and heifers that have calved, 29.7 million head were beef cows and 9.3 million were milk cows.
(Reporter Kristy Foster Seachrist welcomes feedback by phone at 800-837-3419 or by e-mail at kfoster@farmanddairy.com. You can also follow her on Twitter at http://twitter.com/fosterk96.)