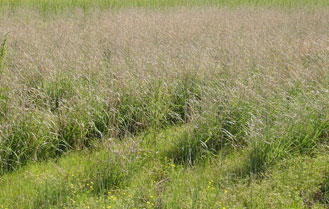 WEST LAFAYETTE, Ind. — The biofuel industry will not be able to meet the cellulosic production requirements of the renewable fuel standard without significant advancements in technology or investment, according to a National Academy of Sciences study prepared for Congress.

Wally Tyner, the James and Lois Ackerman Professor of Agricultural Economics at Purdue University, co-chaired a committee tasked by the National Academy of Sciences to produce the study. The Committee on Economic and Environmental Impacts of Increasing Biofuels Production presented the report Oct. 4.

“We have more than 200 corn ethanol plants producing more than 14 billion gallons of ethanol today. It took 30 years to get there. We have 11 years to reach even higher numbers for cellulosic biofuels,” Tyner said.

“We would need a build rate three times that of corn ethanol. And with corn, we had the technology; we had the feedstock, and prices for corn were relatively low. We don’t have any of that with cellulosic.”

Another problem, according to the report, is the amount farmers would need to make a profit on raising cellulosic feedstocks is more than ethanol producers are willing to pay for those feedstocks. In most cases, the gap is larger than the federal subsidy that goes to federal producers, which may leave investors nervous about getting into the cellulosic ethanol industry.

The report also raises questions about the environmental impact of cellulosic biofuels. Tyner said it’s uncertain whether some cellulosic fuels would lower greenhouse gases because of the emissions that would be released when new land is cultivated.

“There are conditions in which you could see us meeting the renewable fuel standard for cellulosic biofuels, but they require major leaps in technology, substantial increases in oil prices and/or very large subsidies,” Tyner said.

How to keep squirrels off of fruit trees