Before speaking to the Ohio farmers, Brown and Vilsack visited Plastic Suppliers, a Columbus-based company that makes plastic film from biobased materials, to outline how passage of the 2014 farm bill will create manufacturing and agriculture jobs through increased biobased procurement and promotion.

Vilsack extended thanks to the OFU members and members of the National Farmers Union for their advocacy on issues in the new farm bill.

“There are some folks who absolutely wanted to gut COOL (country-of-origin labeling) legislation.” Vilsack said. “But you all injected yourself in the process at the 11th hour, and I will tell you that without your advocacy, without your voice, things could have been fundamentally different on that issue.”

Brown also voiced his support of COOL, saying, “We shouldn’t back off on this.”

“The trade people I know think we’ll be fine on this.”

The Conaway-Costa amendment to the House bill, which would’ve directed the USDA to refocus its efforts on GIPSA regulations, was not included in the conference farm bill.

Vilsack said the new farm bill gives farmers additional opportunities on the credit side, and that farm credit needs to go to the people who need it, specifically beginning farmers and socially disadvantaged farmers.

This month, the USDA also created a new microloan that allows new farmers, particularly returning veterans, to get start-up credit, in a simplified process.

Vilsack pointed out the new farm bill eliminates direct payments, which was hard to explain to nonfarm residents, especially why it was needed at a time when prices were high. It’s replaced with a reliance on crop insurance, “which is easily explained,” and revenue protection plans.

Vilsack said that urban or nonfarm connection is critical for farmers to make.

“I honestly don’t think folks fully appreciate the risks associated with farming,” Vilsack said. “You could be the best farmer in the world, you could make every decision correct, you could plant at the right time, you could get the right chemical mix, and then Mother Nature could decide to rain for 40 days or not rain for 40 months, and your crop’s gone.”

Safety nets reduce the risk of farming to a reasonable level, “so people can stay in the business.” And, he added, that’s important because the U.S. doesn’t want to depend on others outside this country to raise our food.

Vilsack said the success of the nation is rooted in agricultural productivity and efficiency, which is something nonfarm audiences also don’t realize.

Then, as agricultural practices became more efficient, “we were able to produce a whole lot more with fewer farmers, and that freed up people like me and my sons and my grandchildren to be able to have a whole array of opportunities in this country, because somebody else was taking care of their basic need.”

That efficiency also lets Americans spend less on food than any other country.

“It all ultimately goes back to the farmer,” Vilsack said. “This farm bill gives us an opportunity to educate the rest of America of why we are so blessed, and why we have the freedoms and the opportunities we have.”

Vilsack said the problem now is we have great farmers, “but there’s too few of you.”

He said the goal is to use the economy and the farm bill in programs that overlap and encourage smaller farms to stay in business, and gave an example of trying to use GIPSA programs that give smaller farms access to a marketplace and not necessarily have to compete “in a market that is stacked against them.”

“This farm bill gives us an opportunity to do that.”

“This is the first farm bill that I’m aware of that actually creates opportunities that are specifically designed for smaller sized operations,” Vilsack said.

The farm bill, he added, is not simply about SNAP (food stamps) and farm programs — it’s a jobs bill, it’s an infrastructure bill, it’s a energy bill.

“It’s really up to the USDA to aggressively market this bill and utilize this bill to create opportunities.”

“The country continues to need people like you in this room.” Vilsack said,

But the ag secretary also challenged the OFU members to continue to build coalitions within agriculture.

“Ag fights too much against each other,” Vilsack said. “They should be figuring out how to work together.” 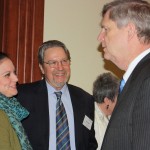 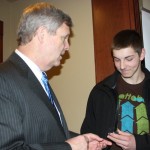 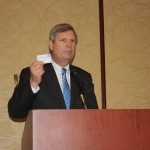 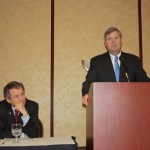 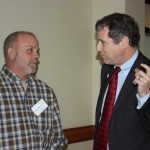