(We are adding more decorated caps to our photo gallery below as we receive them, so keep checking back! And you can share yours by emailing editorial@farmanddairy.com.)

For college students across the country, commencement formally marks the transition from student to graduate. Per tradition, most schools feature speakers, give out awards, organize departmental dinners — and, of course, designate caps and gowns for students to wear when they receive their diploma.

But in the midst of the official pomp and circumstance, more and more graduates are adding a personal touch: They’ll decorate their graduation caps, also known as mortarboards.

Behind the creativity of decorated graduation caps

As a folklorist, I pay close attention to the creative ways in which people choose to express themselves, which can tell us a lot about their beliefs, perspectives and aspirations.

Scroll down to see a collection of local decorated graduation caps.

When I attended my first University of Nevada, Las Vegas, commencement ceremony as a faculty member in 2011, it struck me how widespread the practice of decorating mortarboards had become. I wanted to learn more about how graduates were decorating their caps, what messages individuals wanted to convey and what these messages revealed, more broadly, about their college experiences.

So I began gathering data on the caps from photographs, surveys and interviews. Much of it will eventually be digitally archived by the Center for Folklore Studies at The Ohio State University.

While the project is still ongoing, I’ve begun to identify a few key trends.

The practice of embellishing mortarboards is by no means new. In the 1960s, some graduates would affix peace signs to the top of their caps to protest the Vietnam War.

When I completed my bachelor’s degree at University of California, Berkeley, in 2003, it was not uncommon to see decorated caps atop the heads of graduates. Today, however, it seems to have become much more popular — which can probably be attributed, at least in part, to social media.

As one person I interviewed put it, these caps are very “Instagrammable”: visually appealing, easy to photograph and sure to garner likes and comments.

It makes sense that people would want to announce the accomplishment of graduation, and a photo of a personalized cap posted on social media is one way to do so.

Sharing images of customized caps inspires others to do the same, and so the practice spreads.

(Story continues below photo gallery. Want to show us your cap? Email us at editorial@farmanddairy.com, and we’ll add it to the gallery!)

Shelby Bradford, a 2018 Ohio State graduate in ag communications, voiced her relief at making it to the end of a long college road on her cap. (Photo courtesy Shelby Bradford) 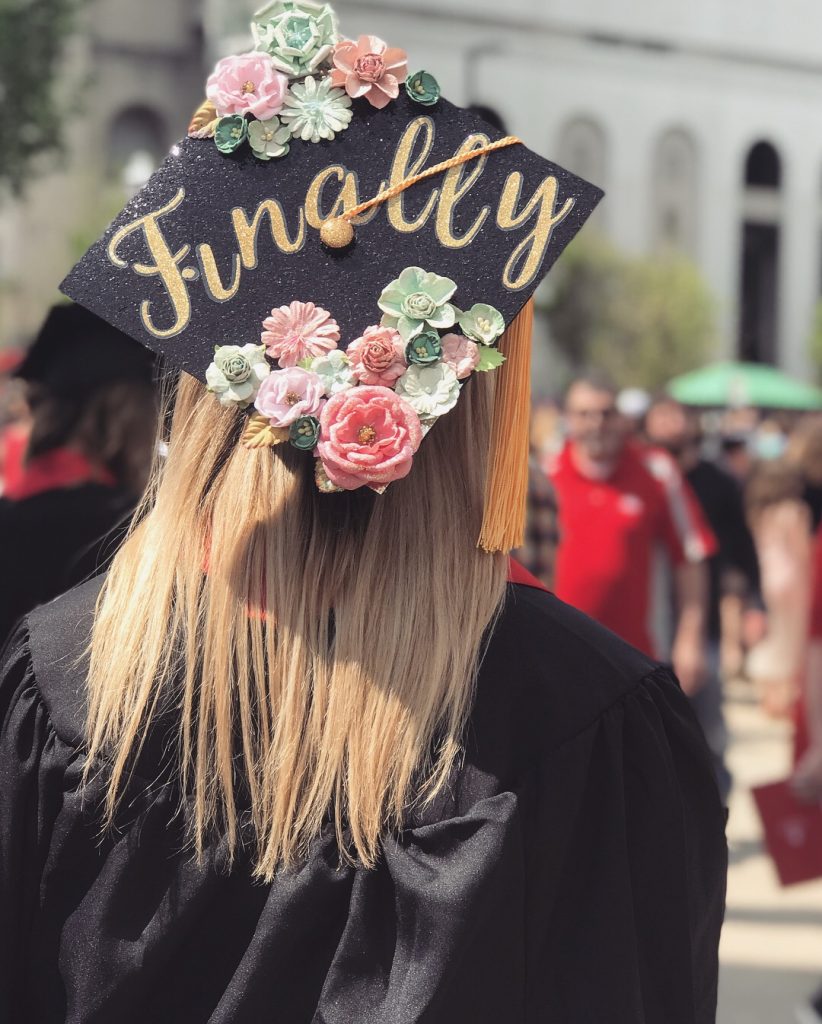 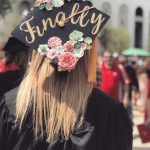 Shelby Bradford, a 2018 Ohio State graduate in ag communications, voiced her relief at making it to the end of a long college road on her cap. (Photo courtesy Shelby Bradford)
2 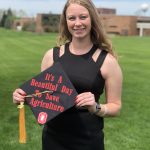 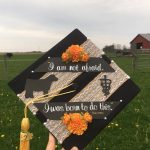 2018 Ohio State University grad Hannah Jarvis, who has been accepted into the OSU College of Veterinary Medicine, added some life motivation to her mortarboard. (Photo courtesy Hannah Jarvis)
4 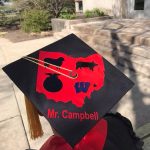 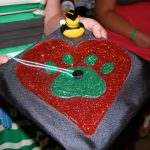 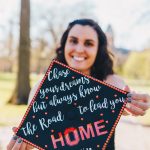 Brianna Gwirtz, OSU ’18 ag communications graduate, of Shelby, Ohio, wove some Tim McGraw lyrics from his son “My Little Girl” into her cap’s design, which is also a tip of the hat to her father’s support. (Photo: Photography by Grace Johnson)
7 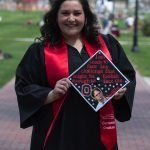 Christine Balint, from Vermilion Ohio, tapped into one of her favorite TV shows, "The Office," for cap inspiration when she graduated this spring from Ohio State University in ag education. (Photo courtesy Christine Balint)
8 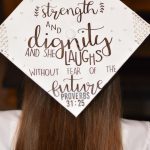 Columbiana County 4-H'er Logan Pasco wore this cap as she graduated recently from Columbiana High School. Pasco, who is the president of the Silver Spurs 4-H club, will be attending Youngstown State University in the fall to pursue a bachelor's degree in nursing. (Photo courtesy Sharon Withers-Baldwin.)
9 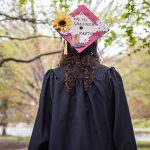 Like her cap says, Columbiana County native Whitney Stear is headed to greener pastures after receiving her ag biosciences degree from Ohio State University this spring.
10 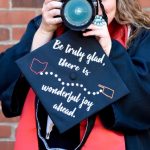 Mandy Taylor, of Holmes County, Ohio, graduated this spring from Ohio State University with a degree in agricultural communications (as if the camera wasn't enough of a hint!).
11 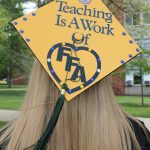 Chelsea Toland, from Harrison County, Ohio, said thanks to her FFA roots in the cap she decorated for her graduation from Wilmington College.

Not surprisingly, many of the messages on decorated caps reaffirm the value of higher education and look optimistically to the future (“The Best is Yet to Come,” “Time to Spread Your Wings”).

Others reflect school pride by including a university logo or mascot or identifying the graduate’s major or academic accomplishments. Identity often influences what appears on the caps. You’ll see students reference their family, their veteran status, their hometown, religious beliefs and personal obstacles they’ve overcome.

Was college worth it?

Humor is also common. Sometimes it’s deployed to highlight the graduate’s personality or mock the formality of the occasion, with phrases like “Thanks Mom, Dad and Alcohol.” One cap had a 3-D model of a beer pong table — little cups included — affixed to it.

But graduates will also use humor to engage with more serious issues. One 2017 UNLV graduate’s cap, for example, featured a homemade version of the “I Have Three Dollars” meme, which features Patrick Star from the animated children’s television show SpongeBob SquarePants. While making a humorous pop culture reference, the student was really calling attention to her experience of being a poor college student — and the fact that she’ll be carrying significant student loan debt well into the future.

It’s just one of many examples that show how graduates can creatively use the space on their mortarboards to resist the celebratory mood of commencement, questioning whether the time and money spent on a degree was really worth it (“My $35K Hat,” “Was the BS Worth the BS?”).

Like the graduates protesting the Vietnam War in the 1960s, today’s graduates are also making political statements. Slogans like “Black Lives Matter” or images of raised, clenched fists will appear on caps.

The University of Nevada, Las Vegas, where I have collected the majority of my data so far, is among the most diverse campuses in the nation. In observing and tracking mortarboard cap decorations over the last couple of years, I have seen a marked increase in the number of caps that highlight the wearer’s racial and ethnic identities (“Black Girl Magic,” “This Xicana from El Chuco. ¡Si Pudo!”).

Then there are the mortarboards that point to the immigrant status of graduates or their families: “They Migrated So I Graduated,” “Product of Immigration,” “A Product of 2 Refugees Now with 2 Degrees.”

To these graduates, it’s important to show that the procurement of a college degree is part of an ongoing family immigration story characterized by hard work and perseverance.

Images of butterflies — a symbol of the immigrant rights movement — also dot many caps. A good number reference the DREAM Act and the hostile political climate immigrants and their families find themselves in.

Everyone experiences college differently. For every student who spreads their wings socially or falls in love with their major, there are those who struggle to stay on top of tuition bills and keep up their grades.

While all of these students end up in the same place on graduation day, a critical look at these mortarboards gives us both a glimpse into the varied paths students take to graduation and the different futures that await them.

(The author is an associate professor of interdisciplinary studies at the University of Nevada, Las Vegas. This article was distributed through conversation.com, is an independent source of news and views from the academic and research community.)