WASHINGTON — When you gather ’round the Thanksgiving dinner table this year, you might want to pass the collection plate before you dig in.

The cost of the traditional holiday dinner just got a little pricier.

The retail cost of menu items for a classic Thanksgiving dinner — turkey, stuffing, cranberries, pumpkin pie and all the basic trimmings — increased about 13 percent this year, according to the American Farm Bureau Federation.

Cheaper than eating out

The farm group’s 26th annual informal price survey of classic items found on the Thanksgiving Day dinner table indicates the average cost of this year’s feast for 10 is $49.20, a $5.73 price increase from last year’s average of $43.47.

“The cost of this year’s meal remains a bargain, at just under $5 per person,” said AFBF President Bob Stallman, a rice and cattle producer from Texas.

The AFBF survey shopping list includes turkey, bread stuffing, sweet potatoes, rolls with butter, peas, cranberries, a relish tray of carrots and celery, pumpkin pie with whipped cream, and beverages of coffee and milk, all in quantities sufficient to serve a family of 10. There is also plenty for leftovers.

The whole bird was the biggest contributor to the final total, showing the largest price increase compared to last year.

Turkey prices are higher this year due to strong consumer demand both in the U.S. and globally, according to John Anderson, an AFBF senior economist.

In addition, “the era of grocers holding the line on retail food cost increases is basically over,” Anderson said. “Retailers are being more aggressive about passing on higher costs for shipping, processing and storing food to consumers, although turkeys may still be featured in special sales and promotions close to Thanksgiving.”

A one-pound relish tray of carrots and celery declined by a penny to 76 cents, while a combined group of miscellaneous items, including coffee and ingredients necessary to prepare the meal (onions, eggs, sugar, flour, evaporated milk and butter) decreased in price, to $3.10. 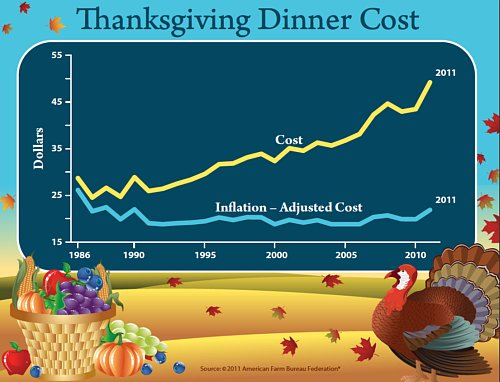 How to make sure farm fresh eggs are safe to eat