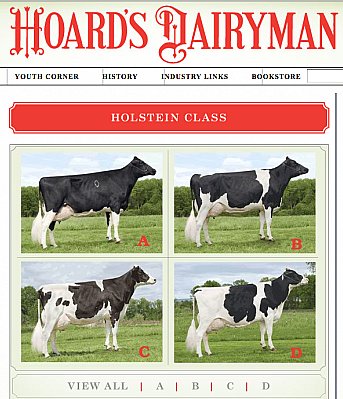 John Winchell is a rock star. Well, not a head-banging musician or Mick Jagger-like rock star, but a dairy rock star. And he’s got the bragging rights — and a traveling trophy — to prove it.

You see, Winchell won the 2011 Hoard’s Dairyman cow judging contest in the agri-marketers division, competing against 962 contestants (OK, so he tied with Angie Kennedy, who works for the Holstein Association USA in California, but he still finished in first place.)

For the uninformed, the Hoard’s Dairyman contest is the holy grail of dairy contests, the Pulitzer of dairy judging. From January through March, the covers of the magazine feature photos of four cows from three angles, one breed each issue. These photos are the only clues you have to placing the cows, as if you were in a live dairy show.

Winchell lives in Buffalo, N.Y., in his capacity as regional manager for the western New York dairy division of Blue Seal Feeds/Kent Nutrition Group. But he’s Buckeye State born and bred, still maintains a home in Vienna, Ohio, and calls himself a “displaced Ohioan.”

This was the first year he’d entered the Hoard’s contest in probably 10 or 15 years. Usually, he’s content to compete against his co-workers in an inter-company contest his employer runs, which is “pretty heated,” Winchell says. (The traveling trophy is for his win in this contest; for the Hoard’s win, he received a plaque and a “huge block of cheese.”)

His strategy this year? Go with your gut, your first instinct. That’s what his former 4-H and then collegiate dairy judging advisers used to tell him.

“If you think about it too much, I think you’re in trouble.”

“I used to break them down by parts and quadrants,” the champ confided. “This year, I looked at them probably two minutes per class.”

Usually, he added, there’s an easy first-place pick and one that you quickly see should be at the bottom of the class. It’s in the middle where dairy judging gets tricky.

“There is no magic to it,” Winchell told me. “I know good cows, but pictures are different.”

Indeed, Winchell knows good cows. An experienced fitter, he also owns show cattle that he takes to about a dozen shows each year, including the Spring Dairy Expo and Ohio State Fair. And he’s an equal opportunity cow owner, having owned or showed Holstein, Jersey, Brown Swiss and Ayrshire cattle.

That breed color-blindness might have helped him in the contest. He mopped up the competition with a 100 out of 100 score in the Brown Swiss division, scored a 98 on the Jerseys and a 96 on the Holsteins. He had a 92 on the Milking Shorthorn class, and then, well, choked, on the Guernseys, scoring an 82.

“And I took the most time on the Guernseys, too!” he added. “The Bateses are never going to let me forget that.” (He used to clip cattle for the Bates family, well-known Guernsey breeders from Trumbull County.)

No one’s asked him for his autograph (yet), but he’s enjoying a little attention within his company (that traveling trophy!) and dairy circles.

And he plans on entering the main division next year. “I’m not going to retire on it,” he said of his championship.

Yep, in our world, John Winchell is a rock star.

— Junior division: Jaclyn Thompson, 14-year-old daughter of Robin and John Thompson of Pulaski, Pa., took third place. She’s a veteran of the Hoard’s contest, entering the past six years as a member of the Sway 4-H Dairy Club led by David Wilson. She’s a freshman at Wilmington Area High School. The Thompsons milk 50 registered Holsteins and Brown Swiss, and also have a 100-sow farrow-to-finish operation.