There’s just the slightest hint of light to the east, a promise of coming action. The law says that shooting time is one half hour before published daylight and duck hunters on the whole follow that decree to the minute.

Digging in a pocket produced a new watch for a time check.

It would be a while, why not just lay back and enjoy the quiet, a soundless time interrupted a time or two by the passing of close by ducks, probably bluebills, on their way to wherever and doing it at near sonic speed.

It’s like being inside a closed closet for me but to the ducks it’s already time to warm up with a few miles of high speed antics. 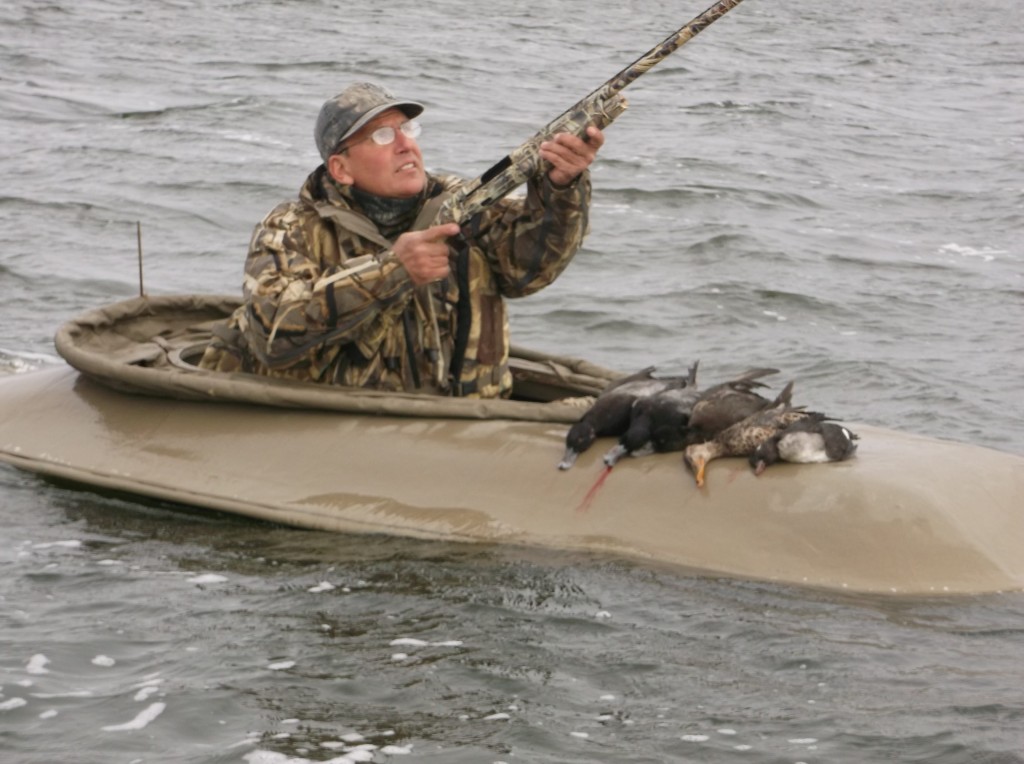 The minutes tick by slowly and the gentle rocking of the lay out boat, the two hours since wake up, and the steaming cup of energy laden jo that I can only dream about, are mine to experience alone.

Good buddy Paul Fedorchak and I rolled here via 1,200 plus miles of interstate, towing a drab and experienced boat filled with giant diver duck decoys and about a market place of other gear. We also carried Fedorchak’s homemade, one-man lay out boat, a clever contraption that allows one to snuggle down to a nearly invisible noting while floating amongst a gaggle of bobbing decoys.

The lay out boat would be the key to our success, we knew it, but the Devils Lake ducks didn’t. That’s a one up in our favor for a change.

One person mans the tender boat and the other climbs carefully into the layout boat, and yes, we both wear life jackets while exchanging places.

The tender moves off some several hundred yards where he awaits the chore of retrieving killed ducks and/or the end of a set time, usually one half to one hour, when it’s time to trade places.

On this morning, it’s my turn to be first and my turn doesn’t start until shooting time begins. That’s still a few minutes away so it’s time to plan.

The decoys are stretched out in a line downwind, anchored at both ends, and we know from experience that for the most part, diver ducks, those that live on the water and in the air, never on land, will swing wide if they are interested and fly low over the decoy line as they pass to inspect their painted cork buddies.

Since we are pointed downwind, the ducks will fly into our face at speeds we can only guess at. We try to shoot only drakes but identifying the boys in a flock is an educated guess rather than a science.

I plan to sit up slowly, shouldering the over/under in a fluid motion. If I begin my movements at the right time, I may get a single shot at a selected bird, and on a rare occasion, a second shot.

Sounds like a good plan. What a joke. When it happens it all happens so fast that any plan is quickly blown away by the Dakota wind, a never ceasing exchange of cold air from some forsaken place up north that is as much a part of the plains states as the never-ending fields of gleaned grain.

The same wind that pushed the Devils Lake water into the back of the layout boat, keeps it bobbing and bouncing, another handicap in the duck’s favor.

Then it is time to shove a couple shells into the Weatherby and lay back.

There’s no science to this. You look down your nose for approaching birds. Some you see but more often than not, they are just there, in your face or already past. It’s a reactive and sudden rush to approaching singles, doubles, and small flocks.

Up quick, pick a bird or miss them all, catch up to it, pass it, don’t aim, just point, keep moving, never stop the swing, slap the trigger and see what happens. No time to calculate a lead, no time to think, hardly time to cuss. React and let it happen. What a great way to hunt ducks.

Happy trails to you, until we meet again

The development of hunters and fishermen as they age