Gary Heberlig arrived at the Pennsylvania Farm Show around 5:30 a.m. every day during the show’s nine-day run, Jan. 3-11, making the 35-mile commute to Harrisburg from his farm in Cumberland County.

Then, like he did every day when he was milking cows on his home farm, he went straight to the barn.

Heberlig is just one of the many volunteers who make the Today’s Agriculture display possible. The display includes an 84-by-42 foot barn that features veal calves in crates, laying hens in caged housing, baby chicks, beef and dairy cattle, a dairy calf in a hutch, turkeys, ducks, baby pigs and hogs. 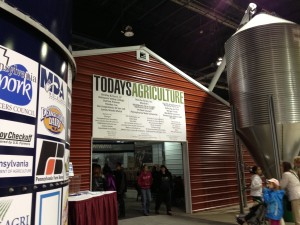 Then, they welcomed the masses.

This huge exhibit commands center stage in the Farm Show Complex’s Weis Exposition Hall. The brainchild of the PennAg Industries Association, the Today’s Agriculture exhibit first opened in 2012 with one goal that remains: to open the barn doors to consumers and show them “today’s agriculture.”

Coordinators estimate more than 400,000 people have toured the exhibit since it opened.

The exhibit, now sponsored by the Pennsylvania Alliance for Livestock Care and Well-Being and still coordinated by PennAg, goes beyond the barn, spotlighting corn and soybean production (actual corn and soybean seedlings are raised specially in a greenhouse for the Farm Show, and mature corn stalks are “planted” in the tons of dirt brought into the complex for the show). 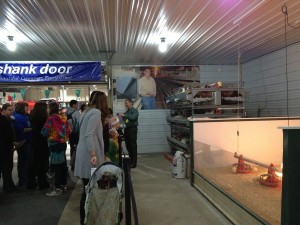 There’s a stream that highlights farmers’ natural resources conservation practices like buffers, cover crops and fencing around waterways. There’s information on grazing and forages, and education on the use of genetic engineering in crops. There are full-sized tractors and equipment in the mock fields, and, new this year, a well head to connect consumers to the state’s oil and gas boom. There’s even a grocery store exhibit to close the farm-to-plate circle.

The display is manned by knowledgeable farm volunteers like Heberlig, industry reps, and the National Beef Ambassadors, who can answer just about any livestock or agronomy or food or equipment question thrown their way.

“I don’t know how many generations most people are away from the farm,” Heberlig said. “We’re losing that farm knowledge.”

“Here, they see the farmer is really concerned about the animals.”

He recalls one visitor to his own dairy farm many years ago who was surprised to discover the milk coming straight from the cow was warm, not cold. And he overheard one visitor to the Today’s Agriculture display, after spying the Purina feed bag in the corner, exclaim, “You’re feeding the hogs dog food?”

“They didn’t understand Purina makes feed for everything.”

Read Susan Crowell’s commentary after visiting the opening of the Today’s Agriculture exhibit in 2012.

The words under the Today’s Agriculture logo are sage: “Opening the Doors: Farming, Knowledge, Trust.” The Today’s Agriculture exhibit coordinators know that lack of knowledge about agriculture doesn’t mean someone’s ignorant or doesn’t care. More often, it means that someone simply hasn’t been exposed to agriculture, hasn’t visited a farm and doesn’t know a farmer.

But consumers do care about their food, want to know that it’s safe, and that it’s being produced as humanely and environmentally responsible as possible. And they aren’t going to learn that unless we tell them. Unless they meet a farmer like Gary Heberlig who gains their trust.

Unless we open our barn doors like this Pennsylvania exhibit.

A testimony to the Ohio State Fair’s milking parlor

The sounds of not so silence