WOODSFIELD, Ohio — Through the diligence of several hard-working individuals in a very short period of time, the Monroe County Community garden has become a reality.

As the project progressed, other partners were added, including the Monroe County Park District, Monroe County Historical Society and Woodsfield Elementary.

I was asked in February if the Monroe Soil and Water Conservation District would like to be involved. Having toured the Belmont County community garden, I thought it was a wonderful project and instantly said yes.

The garden gives individuals who don’t have the space or equipment the opportunity to rent raised garden beds in an enclosed environment to raise their own fresh food, enjoy the outdoors and connect with other individuals who enjoy gardening.

The committee was able to get a great deal of work done in a short period of time. The group met weekly and the progress kept flowing. Cash donations were received from Safe Auto, Rolling Hills Ruritan, Monroe County Farm Bureau and the Monroe Soil & Water Conservation District.

In kind donations of compost from Bill Hoag, wood chips from Asplundh, water hydrants from Green Valley Coop and Monroe County Park District, a water hose from Joyce and Bart Wiggs, gates and hardware from Dennis Miller and the use of tools from Woodsfield True Value were received. Glenda Thomas donated barrels for rain barrels that were assembled by the Monroe SWCD.

Bill Thomas donated the use of his Bobcat. Les Kuzior hauled dirt and compost for the beds. Bob Daugherty and the Swiss Hills junior carpentry class fabricated fence pickets, drilled holes in the white oak lumber and built the beds.

Mike Sechrest, from the Belmont County Correctional Institute, brought his landscaping students. These men set the beds, leveled them, filled them, mulched the area and worked on the picket fence. By May 1 we were able to have a kick-off meeting. Some people began planting before the fence was completed. Now the fence and gates have been completed and the beds have been planted.

The garden is behind the Parry Museum in Woodsfield. Various activities and workshops are being planned including a rain barrel workshop. Visit www.monroeswcd.org for dates and times of upcoming events. 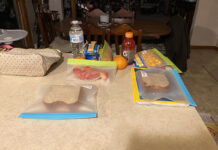 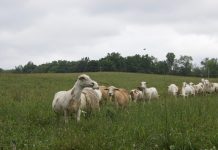