SALEM, Ohio — The number of permits issued for new shale wells continues to drop, not just in Ohio, but in West Virginia and Pennsylvania as well. To show how much the drilling and well permitting is slowing down, take a look at Bradford County where the shale boom began in 2008.

As of the end of September, there were 178 producing wells in Harrison County, 137 additional wells either drilled or in some other stage, and 376 total permits issued since the shale boom began.

To date, the ODNR has issued a total of 251 permits in Belmont County, where there are now 105 producing wells and an additional 96 wells in some sort of drilling phase or awaiting infrastructure. 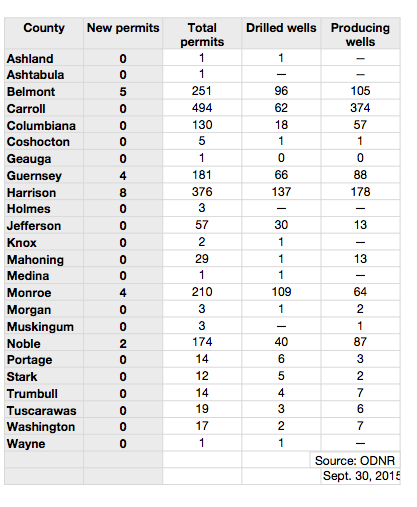 The four Monroe County permits are for wells to be drilled in Seneca Township by Antero Resources Corporation. So far, there are 64 producing wells and 109 wells drilled, awaiting infrastructure.

Last month, the ODNR issued Antero Resources Corporation two new permits for wells in Wayne Township, Noble County. According to the ODNR, there are 87 producing wells and 40 other wells drilled in Noble County.

Two permits were issued for wells in Lawrence County during September. So far in 2015, 28 permits have been issued in the county, which included 17 for a combination of oil and gas wells, nine gas wells and two that were for multiple well bore type.

The DEP also reported there were two shale wells drilled in September and a total of three have been drilled this year.

The West Virginia DEP also showed a decrease in the number of permits issued for both the Marcellus and Utica shale during September. In Ohio County, the DEP issued two Marcellus shale permits to the SWN Production Company for two separate well pads with two different surface owners.

In Monongalia County, the DEP also issued two permits to Northeast Natural Energy, for drilling on the same well pad.

Tyler County, which has been a hotbed for Utica shale drilling, also showed a slowdown. The DEP issued just one permit in Tyler County during September, a permit issued to Jay-bee Oil and Gas.