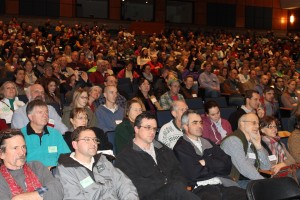 GRANVILLE, Ohio — More than 1,100 people filled the Granville Middle School Feb. 16-17 to hear about the latest climate in organics and local foods production.

Climate was a literal part of the discussion, as multiple speakers spoke about the ways that cover crops and crop rotation can help reduce global climate change. They gathered for the 34th annual Ohio Ecological Food and Farm Association conference — a statewide event.

Jim Hoorman, OSU assistant professor and extension educator, gave a compelling talk about all the different ways climate change could affect agriculture at all levels.

On the plus side, he sees a longer growing season. But it will likely come with increased precipitation events, more insects, heat and heat damage.

Cover crops are a proven way to keep soil and nutrients in place, loosen soil and reduce compaction, and they also are known to absorb and sequester a substantial amount of greenhouse gases — one of the causes of climate change.“We have a tremendous ability to help moderate some of these climate events,” he said.

Hoorman said rain events are going to be more intense. Instead of 1-inch rains, he said to expect 2- to 3-inch rains.He also predicted a continuous shrinking of the planting window, which means farmers will have fewer suitable days to get in and out of fields. He expects advanced tractor technology will help get things done quicker, including robotically operated tractors.

Hoorman said organic agriculture and cover crops has shown a “tremendous decrease in the amount of fertilizer and herbicides needed,” and predicted the nation will become “more and more organic as time goes on.”

In the afternoon, keynote speaker and Organic Valley CEO George Siemon discussed the success of CROPP — one of the nation’s largest organic farming cooperatives — which he helped to found in 1988.He also talked about the challenges he still sees in the food industry.

“The world needs changed very badly,” he said. “If you don’t acknowledge something, you can never fix it.  We’ve got lots of problems in the food world and we need to address them.”

Siemon said he and his partners started the parent company — Cooperative Regions of Organic Producer Pools — to provide some market security for organic producers.

“We really felt that if we were going to have organic food, we needed to have a fair price for farmers,” he said, so they could “know” what they were getting paid, and avoid the ups and downs of the market.

He said he’s concerned that genetically modified organisms — GMOs — have gone too far and pose a threat to organic interests.

Siemon also challenged what he called were “measured attacks” on the organic industry, including the claim that conventional farming feeds the world.

According to Siemon, more people are fed by peasants and gardeners than modern, conventional agriculture.

He also questioned whether conventional food can really be considered safe, when the U.S. Department of Agriculture and Food and Drug Administration approve chemicals based on risk level — not safety.

Siemon said he’s seeing more and more land go into large agribusiness use, which he also criticized.“They’re (industrial farmers) pushing people off the land in bringing in 12-row corn planters,” he said.

From a health perspective, Siemon reminded the audience of the rising rate of obesity and life-threatening diseases — and the potential for good eating to lead to good health.

Participants cook their own meals in wood ovens, learn to reuse, repurpose and recycle as much as possible.The Warmkes also store up food during good times, so they can be prepared during difficult times.“It’s just amazing what a sense of security it gives you,” Annie Warmke said.

(Read about the service and stewardship award recipients.)