The Ohio Department of Agriculture ordered the steer to be disqualified and stripped of all earnings mid-December, after urine tests from the steer, shown by exhibitor Avery March on Aug. 9, revealed the presence of acepromazine.

The department’s investigation did not reveal who was responsible for administering the drug, and family members denied any involvement of knowledge of the source.

The county fair board met Jan. 9 and produced a news release, saying ” that the sanctions as issued by the State of Ohio were sufficient and no further sanctions would be undertaken by the board.”

The Ohio Department of Agriculture established a withdrawal period for the medication, and after that time had elapsed, the steer was sent to slaughter.

The meat was completely safe for human consumption, according to the fair board and ODA.

The buyer, Lisko Amusements, paid about $3,000 for the animal and requested the funds, which were returned to the Ashtabula County Agricultural Society, be placed into a fund for educational programs for market animal exhibitors. 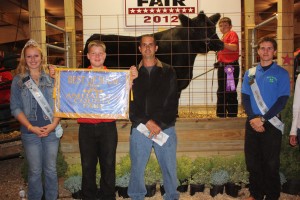 JEFFERSON, Ohio — The Ohio Department of Agriculture has disqualified the best of show market steer shown at the 2012 Ashtabula County Fair (Aug. 7-12), after inspectors confirmed the presence of the tranquilizer acepromazine in urine tests conducted Aug. 9.

The steer was shown by Avery March, 11. It was cared for in part by his father, Brian March, and his grandparents, Dale and Christine March.

Inspectors could not determine who administered the drug, and family members denied any involvement or knowledge of giving the drug when interviewed by state officials.

The order from the department, dated Dec. 14, strips the animal of best of show status and also takes away all earned proceeds and awards. The animal sold for $2.40 a pound, for nearly $3,000 total.

All exhibitors are required to complete a drug use notification form, certifying the animal to be free of medication, and also list any medications for which the withdrawal period has not elapsed prior to the show. Champions are required to complete a new drug use notification form at the time additional urine/hair samples are taken and sent to the state’s testing laboratory.

In addition, the Ashtabula County Fair premium book states: “No tranquilizers may be used on animals at the fair, including products such as Calf Calm and diuretics for cosmetic purposes.”

State Veterinarian Tony Forshey said the drug acepromazine has a “calming effect,” but is unlawful to use on cattle. He said the state has a “zero tolerance for those types of drugs,” because they violate the state’s anti-tampering law.

The state’s investigation revealed the animal had a natural tendency to be “skittish” and “jumpy” in new environments, according to sources at the fair.

Fair Board President Larry Kotnik said the board had not yet met to discuss the state’s order, but expected the matter would surface at the Jan. 9 board meeting. The fair’s rules state livestock “are to be free of any drug residues upon arrival at the fair or delivery to the slaughter house for the carcass shows.”

Fair staff were notified about the potential for a positive drug test and the steer was taken directly to fair board member Thomas Mazzaro’s farm, where it was held until ODA notified him it was safe to release the animal for slaughter.

Attempts to reach Dale March were unsuccessful at presstime. In addition to being one of the animal’s caretakers, he also is a fair board member.

Brian March insisted the family had “no part in it whatsoever.” But because Ohio rules have a zero tolerance, “somebody has to be accounted for.”

“They (inspectors) couldn’t find anybody to be accounted for, so since it was our animal, we have to take the punishment,” March said.

He said he did not plan to appeal the order, because he could not prove who was responsible. He said the family intends to continue showing beef cattle.

Avery March was questioned during the inspection, but did not show any signs of being involved with the incident, according to the report.

Forshey said another violation involved an animal with an undescended testicle — an issue he said exhibitors often are unaware of until the animal is slaughtered. He advises exhibitors to be certain of the manner in which their fair projects are castrated, to avoid this issue.

Overall, he said the four violations in 2012 were about half of those issued in the previous year, and about a third of most years. He attributes the reduction to strong enforcement by fair board members, who “have done a great job of enforcing their own rules.”

The rules are important, he said, because they help ensure the safety of meat entering the market.

“That’s the intent of this whole thing, is to be sure that all of those animals going to market are safe to enter the food chain,” Forshey said.