BELLVILLE, Ohio — If you’ve visited a farm tractor show in the past 10 years, or driven by a tractor dealership, it should be no surprise that the size of the machines are bigger and more powerful than ever.

A growing world population and a growing middle class are creating a strong demand for food — especially meat. And to produce more meat, you have to grow more crops to feed more livestock.

Right now, that means bigger equipment. But in the future, it could actually mean smaller equipment — with more efficiency.

“As the middle class grows their dietary preferences change and one of the things they like to put in their diet is animal protein,” said Scott Shearer, chairman of Ohio State University’s Department of Food, Ag and Biological Engineering. “When you go to animal protein, it may take six-eight times the number of units of plant protein to generate that animal protein.”

Shearer spoke at the Northeast Ohio Agribusiness Forum breakfast event held March 28 in Bellville, where he shared insights into the future of farm equipment. 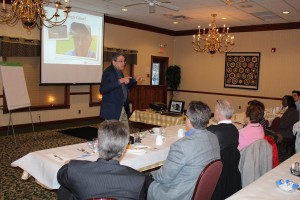 He said world demand is creating more demand for farmers’ goods, and for machines with more horsepower.

“Nothing whatsoever is stopping the increase in size in agriculture tractors,” he said. “Today, it’s about logistics and it’s about moving mass to and away from machines.”

He gave an example of a 700 hp tractor that was displayed at the Ohio Farm Science Review in September, and said even bigger models are in the works.

Attachments like corn planters and wagons are getting bigger, too, with some farmers now using 48-row corn planters — twelve times larger than the once-common four-row planter.

While machines continue to get larger, Shearer said they also continue to get smarter — with increased automation and precision. The recently introduced 20/20 SeedSense monitor, for example, allows farmers to view how accurately each seed is dropped into the furrow, by measuring downforce, adjusting meters and speed and displaying any mechanical problems.

Shearer said planters can now travel at speeds of 12-14 miles an hour, and researchers are currently studying ways to drop each seed just right, to maximize the corn plant’s leaf canopy, which in turn maximizes yield potential.

“It’s all going to be about placing the seed in the ground and the orientation of the seed when it goes into the ground,” he said. “I think all of our fertility programs are going to be targeted at individual plants in the future,” he said.

As tractors get smarter at what they do, they could actually become smaller, but more computerized and more robotic.

As that happens, he predicts the size of the tractor will decrease to about 50 horsepower and will be fully autonomous — meaning it operates by itself with oversight by a human watching a computer monitor.

He thinks it’s possible one human will operate six-seven of these 50 horsepower tractors, which will need very little oversight.

“We’ll plant 24 hours a day, seven days a week, as long as the conditions are fit,” he predicted.

Shearer said one of the reasons he thinks machines will become smaller — in addition to the ability to be more efficient — is because current machines are too heavy and causing too much compaction.

Another issue, he said, is that the diesel engines used to power the large, modern tractors are under increased scrutiny from the federal EPA to meet costly engine emissions standards — often approaching the cost of the engine itself.

This could revolutionize the future of tractor engines, causing a return to gasoline engines, or engines that run on spark ignition.

“Everything is pointing in the direction of going back to spark-ignition engines,” he said.

Shearer said the 50 horsepower automated tractors he envisions are not yet in production, but he thinks they will get their start soon — likely from small-scale entrepreneurs like “mom and pops operations.”

Some of the major farm equipment manufacturers have released robotic tractors already, but farmers have been slow to welcome the new technology. Cost is a factor, as well as concerns over whether the investment will make sense for the long-haul.