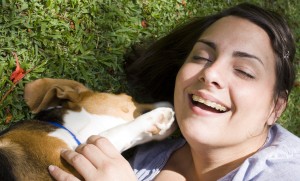 LONDON, Ohio — Hollywood likes to promote the myth that humans are always the “victims” when it comes to diseases transmitted between animals and humans, referred to as zoonotic diseases.

But in reality, the illnesses can pass either direction, said Armando Hoet, director of the Veterinary Public Health Program within Ohio State University’s College of Veterinary Medicine.

“The truth is, you are more likely to get an infectious disease from another human than from an animal,” Hoet said.

Plus, Hoet added, humans are also an important source of infectious agents to animals, as many infectious diseases, such as tuberculosis, multidrug resistant Staphylococcus aureus or MRSA, and intestinal pathogens, just to name a few, can be passed from humans to animals, making them sick, too.

Hoet will discuss the diseases that can move from humans to animals, and vice versa, and how to prevent this transmission, Sept. 18 at 2 p.m. at the Farm Science Review.

His session will be repeated Sept. 19 at 1:40 p.m. as part of the daily Question the Authorities series.

There is animal link

In the past 60 years, more than 70 percent of all newly emerging infectious diseases in humans have originated from animals.

“So, it makes sense to cover a topic about the transmission of infectious diseases from animals to humans with people attending the Farm Science Review, as they work or interact on a daily basis with animals during their routine activities on the farm,” Hoet said.

He will focus his talk on LA-MRSA, which has increased in prevalence in different animal populations around the world and is now being reported among U.S. animals.

Staph bacterium are commonly present on the skin, nose and other locations of the human body, and rarely in animals.

Staph infections in humans are typically easily treated with common antibiotics such as penicillin or amoxicillin. However, some groups of Staph have become resistant to all the typical antibiotics used as the first line of defense to treat these infections, Hoet said.

“These MRSA are very difficult and expensive to treat,” he said. “It is very, very important to highlight that MRSA is a primary human pathogen that is now ‘spilling over’ to the animal side, but once animals are infected with MRSA they can pass along such superbugs to other individuals, including humans and animals.”

Because Staph infections, specifically MRSA, are increasing in number in different animal populations, it is ever more important that animal handlers learn how this superbug can be transmitted, so they can learn how to protect themselves and their animals, Hoet said.

Learn what you can do

His Farm Science Review conversation will focus on learning about zoonotic diseases, and also how to minimize the risk of transmission from animals to humans by applying common-sense practices that can effectively protect the individuals handling animals and their families.

“The take-home message will be to learn personal hygiene and good practices at the farm level when working with animals,” Hoet said.

People mainly get MRSA from animals through direct contact with an infected animal.

“There has to be a major breakdown in the personal hygiene of the individuals who are being exposed for them to acquire a MRSA infection, which is why we will emphasize a lot during our presentation about the regular application of good personal hygiene practices during your interaction with animals,” he said.

“In any case, you always have to be aware of your personal hygiene when working with animals, so you can minimize the risk of zoonotic transmission of infectious diseases,” he said.