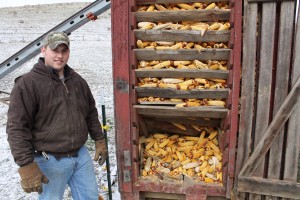 WARSAW, Ohio — As a boy, Ben Young spent his summers helping his grandparents care for the beef cattle and crops on their Coshocton County farm.The couple, Clyde and Donna Young, had five children and multiple grandchildren. But Ben was the one who wanted to farm — at least full time — and the farm is now in his hands.

Ben has expanded the cattle herd to include 45 head of breeding cows, and about 18 steers he fattens out each year, mostly for privately sold freezer beef.

He farms 300-plus acres and produces about 8,000 square bales of hay each year. He feeds some and sells the rest. He also raises a couple litters of hogs every year, and picks ear corn, which he stores in a crib and uses to grind into feed.

He’s a little bit old-school in today’s farming world, but what he does works. Ben relies on some of the same knowledge that worked for his grandfather and grandmother for decades, while also adding some new ideas.

Most of his planting is no-till, at least on the hillsides. With the help of a newer, heavier planter purchased last year, he has no trouble punching through the ground to plant the no-till seeds.

Ben and his grandfather upgraded to a larger tractor just three years ago — a Ford TW-20. It gets everything done they need, even in the steep terrain of Coshocton County. The TW-20 generates more than 130 horsepower, according to Tractordata.com, and has been a good fit.

In addition to farming, Ben and his family have a rich heritage as firefighters. His father, Nelvin, is a full-time firefighter in Columbus, and Ben’s step-father, Steve Fox, is a retired fireman.

There are times when being a farmer gives him the flexibility to respond to emergencies, and other times when he has to make himself be flexible.

Sometimes, that means leaving a field or leaving chores unfinished. But, he enjoys doing both things.

“I always said I wanted to be a farmer and a fireman and I work part time on the fire department and I farm now,” Ben said.

Ben receives help from some of his family, when they’re available, but it’s mostly his project.“He’s really been wonderful,” said Donna Young. “He seems to be really well organized.”

She said Ben was especially helpful three years ago, when Clyde suffered an accident that shattered some of his bones. Ben kept the farm going and kept his grandfather up to date with what was going on.

Clyde has physically recovered, Ben said, but is taking things a little easier. The 85-year-old occasionally rides his four-wheeler across the farm, and gives Ben advice when needed.

Ben does direct marketing for some of his beef, and also sells to Local Bounty — a small local foods market in Coshocton. He’s hoping to continue growing his beef herd, to meet demand.

He has taken agronomy classes at the Agricultural Technical Institute in Wooster, where he learned basic skills like soil testing and crop performance.

The experience at ATI has helped Ben improve his own farm business while also doing more of the work himself.

“I don’t have to pay somebody to tell me the things that I learned (at ATI) that I can do myself,” he said.

Ben only needs a couple more classes to finish his associate’s degree at ATI. A bigger challenge, though, is where the farm will go in the future.

He now owns most of the equipment he uses, and has become familiar with all the basic farm operations. But the land is still owned by his grandparents.

Ben said he is interested in buying the farm, but the family is still discussing ways to make this work. The price would need to be fair to his aunts and uncles, while also being something he could afford.

Donna said she and Clyde would like to see the farm continue, but that it’s not an easy fix.“That’s the big question, is how to do that,” she said. “At our age, we’re not able to do much.”

Ben said the value of the farm could be quite high, if priced at its top use. But, if priced at an agricultural value — it would likely be more reasonable.

A big factor in farming, he said, is that commodity prices and cash receipts can change dramatically. Although grain prices have been strong in recent years, things could change at any moment.It’s a risk Ben takes every day, even as he rents the land. But he’s committed to being a farmer.

Read about how a Morrow County young farmer and FFA member is transitioning on his family’s farm.