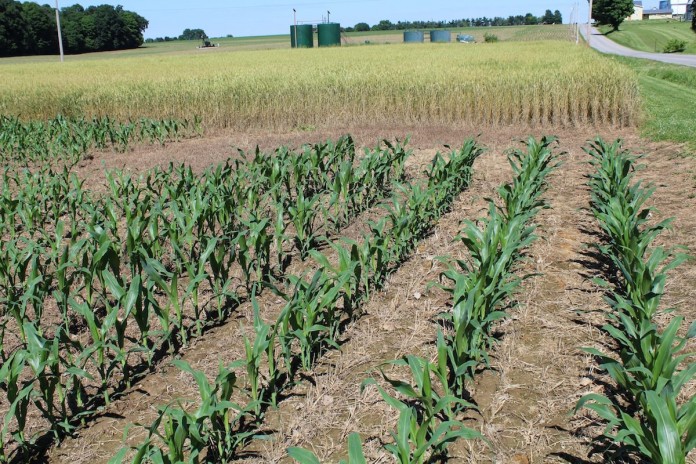 WOOSTER, Ohio — Farmers in Ohio and Pennsylvania have cleared at least two hurdles this growing season. Despite a wet start that kept most out of the fields until the end of May, most were still able to finish planting by the first week of June.

And, despite fears that the late-planted crop would suffer from early-summer heat and dryness — most temperatures have remained normal, to slightly above, with ample to excess moisture.

According to the National Agricultural Statistics Service, corn and soybean emergence is actually ahead of the five-year average, as weather has been “nearly ideal for growing conditions.”

However, conditions have varied greatly across Ohio and Pennsylvania, with some crops emerging but with a noticeable yellow color from excess moisture and nutrient depletion.

“Corn seedlings often turn yellow due to low nitrogen uptake and/or limited chlorophyll synthesis under cool, wet conditions,” said Peter Thomison, Ohio State University field crop specialist, in a recent edition of OSU’s CORN Newsletter. “The visual appearance may be interpreted as (nitrogen) deficiency, but often this is not the case.”

What often happens, Thomison said, is excessive water leads to poor respiration of the roots, inhibiting nutrient uptake, or, there’s an accumulation of nitrite in the soil (especially in poorly drained soils), which is toxic to the plant.

The good news, however, is that “yellowing of corn plants at this stage of development generally has little or no effect on later crop performance or yield potential.”

If it’s induced by environmental conditions, Thomison said, the yellow color should change to a healthy green after a few sunny days with temperatures above 70 degrees.

If plants remain yellow, then closer inspection and assessment are needed to determine if the yellowing is caused by nutrient deficiency, or another factor.

Another issue has been rootless or “floppy corn.” Just like the name suggests, this corn suffers from an under-developed root system. However, if conditions are ideal, the plants usually overcome this.

Rootless corn is typically caused by dry soil conditions under hot temperatures and windy days, and is generally seen in plants from about the three-leaf stage to the eight-leaf stage of development, according to an OSU Extension news release.

“Growers with impacted fields will see plants that have fallen over after a strong wind because there is a limited number, or no nodal roots, supporting them,” Thomison said. “In addition to dry soils, rootless corn is caused by shallow plantings, compacted soils and loose or cloddy soil conditions.”

Still, he tells growers “not to panic or tear up the field. The plants just need a good rain to help generate nodal root development.”

While some fields have been quick to emerge this year, other crops are still poking through the ground and leaving farmers to wonder about stand health and consistency.

Unless growers with uneven soybean emergence can determine their seedlings are dead, they may want to hold off on replanting, said Laura Lindsey, a soybean and small grains specialist with OSU Extension.

Growers should start evaluating their soybean fields to see where they are at, but should realize that there may be some emergence issues, Lindsey said.

However, with soybeans, she said “you have to keep in mind that while stands may not look so great right away and emergence is uneven, soybeans will even out in most situations.”

In Ohio, precipitation for the week that ended June 22 ranged from about a quarter-inch,  to 5.28 inches, with a statewide average of 1.62 inches, according to NASS.

Soybean planting is nearly finished, though heavy rain recently may have delayed some planting. Growers are spraying earlier planted soybeans for weeds and sidedressing corn.

In Pennsylvania, the average height of emerged corn is 15 inches. The wet weather prevented most farmers from harvesting alfalfa last week and there are reports of crop damage.

While the focus lately has been on newly planted crops, farmers will soon be turning to winter wheat, which is beginning to turn gold as it nears harvest.