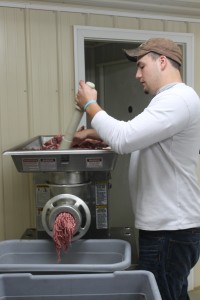 BEAVER FALLS, Pa. — Freddy Pflugh, 20, is connecting his heritage to what he wants to accomplish in life.
Pflugh, a butcher, just opened a business on his family’s farm in Beaver Falls, Pennsylvania. The entrepreneurial Pflugh feels that it’s the perfect time to open a custom butchering business because more families are choosing to purchase a hog or beef and have it butchered the way they choose.

Q. Why the name, Milkhouse Meats?

A. The shop is located in his family’s barn that has been renovated, which is where the name comes from. The barn was last used to house chickens in the 1970s.
* * *
Q. How did he get started in the butchering business?

A. Pflugh is a third generation butcher — his uncles, father and grandfather have worked as butchers. When he was 16, he started working at a meat retail store on his mom’s side of the family. He learned how to cut meat and that the customer is the boss.
Pflugh said he learned how to break a carcass down into meat cuts that consumers want, based on the muscle groups. He doesn’t process the meats at this time due to logistics, but with the help of a meat packer in northern Beaver County, he hauls the meat back to his butcher shop after it is processed and works as a custom meat cutter.
* * *
Q. Why did he decide to open his own business?

A. Pflugh said he knew that he didn’t want to work in a commercial butcher shop — he wanted to do more than get meat out of a box and cut it.
“I knew I wanted to do something different,” he said.
He wants to be involved from start to finish, whether it is working with a farmer to provide the best beef to a customer or with a customer who has grown his own meat and wants it cut to his specifications.
“I want to provide local meat from our own neck of the woods, instead of it coming in boxes from places we don’t know,” he said.
“It’s all about making customers happy and ensuring they have what they want out of their meat,” said Pflugh.
He said he likes the hard work that comes with his own business, and his goal is to make sure the job is done right.
* * *
Q. What is about butchering that made the job appealing?

A. Pflugh said he grew up around meat cutting so it just made sense to him that should be his future.
“It’s tradition in our family to be a meat cutter,” he said.
* * *
Q. What will be key to the company’s success?

A. “You have to be able to communicate and talk with customers.”
He said whether it is talking over the counter or helping a customer determine how to cut half a beef, “it’s all important.”
Pflugh said meat cutters have to make the customer happy and that means being able to discuss the thickness they want of certain meat cuts or how many pounds of hamburger they need.
* * *
Q. What’s the next step with your business?

A. Pflugh said one goal he wants to achieve personally is to complete his degree at Geneva College where he is studying business.
But for the business, Pflugh wants to obtain a retail license and become federally inspected.
“It opens the door for opportunities,” Pflugh said.
* * *
Q. What types of meat does he cut?

A. Pflugh cuts beef, pork, lamb, elk and Red Stag, which is a New Zealand deer. He is also raising his own meat supply. Currently, he is raising 29 hogs and eight beef.
“I’m trying to raise my own supply. However, a lot of farmers produce quality beef cattle, and we are buying from them to serve our customers,” Pflugh said.

* * *
Q. What is the biggest investment in business so far?

A. Besides time, Pflugh said his biggest investments has been a smoker, which gives the customers what they want in the flavor, and a vacuum pack machine, which allows the cut meat to be frozen longer.
He said that he is taking his business one step at a time. He has contacted the Pennsylvania Department of Agriculture about what it would take to start a custom butchering business. He worked with inspectors to decide on a layout for the cutting area so that it would provide best area for him to complete his work and ensure the meat is safe.