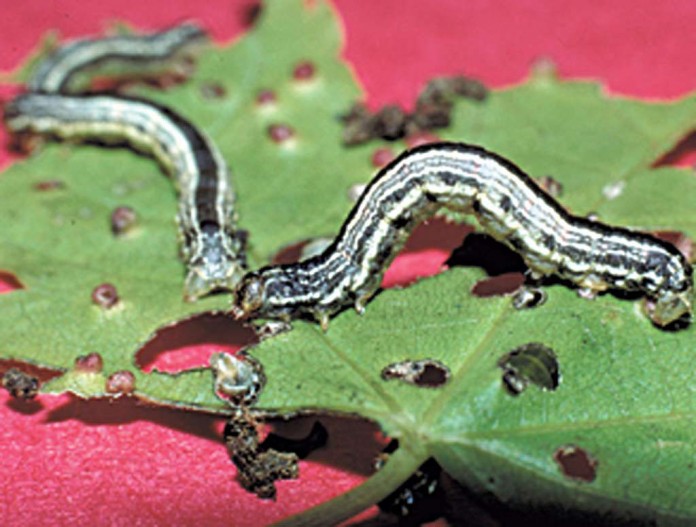 CHARLESTON, W.Va. — Fall cankerworms are overrunning Eastern Jefferson County from around Harpers Ferry to the Shannondale area, according to West Virginia Commissioner of Agriculture Walt Helmick.

At the same time, 2 million acres in eastern Virginia are experiencing an unprecedented outbreak, and cankerworm populations there are showing no sign of collapse.

Although the insects [Alsophila pometaria (Harris)] are harmless to humans, fall cankerworm frass (droppings) can be a nasty nuisance beneath trees, as can worms descending to the ground on silk strands. Once there, they will burrow into the ground until fall when they will emerge as moths to reproduce, giving them their name.

At this time of the year, the insect is a light green to dark brownish-green inchworm that voraciously munches leaves from trees. They favor basswood, elm, hickory, maple, oak, birch, apple, ash, beech and cherry. This wide variety of hardwood hosts can result in large areas of defoliation when populations are high. A high ratio of dark to light caterpillars can be indicative of a heavy infestation.

Healthy trees can usually rebound from the defoliation, but excessive damage can stress them enough to kill them, particularly when it occurs in successive years.

Historically, large cankerworm outbreaks tend to collapse after two or three years due to the impact of several natural factors, including disease and predation by birds and other insects. However, populations in eastern Jefferson County have been building the last two seasons and a more-widespread West Virginia outbreak is a possibility.

When the cankerworms emerge in the fall, the females are wingless and must walk up tree trunks to lay eggs on a tree, where new larvae will hatch in the spring.

A non-chemical way that may protect isolated trees is trapping the wingless females in sticky material (e.g. TREE Tanglefoot®) as they crawl up the trunk to lay eggs. These sticky substances can cause injury to the tree, so they should be applied to duct tape or plastic wrapped in a band around the trunk.

The products should be applied starting in October, must be cleaned and renewed as often as they become crowded with moths, and must be left on through March to catch a similar spring species. Young cankerworms in the vicinity may blow to protected trees, limiting the usefulness of this method.

Spraying pesticides in early May can also help control populations in small areas. Materials registered to control cankerworms include Bacillus thuringiensis (Bt), carbaryl, and acephate. Be sure to refer to the pesticide label for specific use instructions. The services of a certified arborist may also be useful.