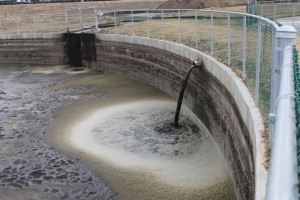 UNIVERSITY PARK, Pa. — A narrowly averted farm tragedy this month has a farm safety expert in Penn State’s College of Agricultural Sciences renewing his warning about the dangers of toxic gases emanating from manure-storage facilities.

The stark reminder of the serious hazards lurking around manure pits came to light once again Sept. 17 on a Montour County farm, explained Davis Hill, senior extension associate in the University’s Agricultural Safety and Health Program.

Two brothers, ages 2 and 4, were found unresponsive next to the family farm’s manure storage just minutes after their father and grandfather began agitating the manure in the tank. The brothers were riding their bikes on a roadway that runs next to the structure.

“Their dad explained that he had just started the tractor that operated the agitator,” Hill said. “He checked the connections for leaks and then decided to walk around to the back of the structure so he could see into the top more easily to make sure it was mixing correctly. The back of the structure was buried in the ground with a roadway around the back which leads up to the barnyard.

“As he walked around the side toward the back, he found his two sons. The youngest was blue while the other one was very pale.

He immediately told his dad to shut down the agitator and call 911 while he moved both boys to fresh air.

The manure storage structure is 124 feet across and 12 feet deep, Hill noted. The tank was partially buried and partially above ground. It was nearly full and covered with the typical crust that forms on top of liquid-manure storages. It was the first day for agitating the storage.

“The first day of agitation or mixing of the manure is when we often see higher levels of manure gas,” he said. “When you break up that crust and stir around the manure, gases that are contained below the crust are allowed to pour out of the storage.”

The back side of the structure is mostly buried, with only a foot or so above ground level. The gases “boiled over” the wall and settled next to the structure, where the children were found.

“No one really would have suspected that until this incident happened, and now, it is very clear to see,” Hill said. “Being heavier than air, the toxic gases would accumulate right where the children were riding their bikes.”

There are four predominant toxic gases that are produced during manure storage and released during agitation. The most serious of these, from a health standpoint, is hydrogen sulfide. This gas is colorless and has a rotten egg smell at very low concentrations, but people are not able to detect this odor at high concentrations.

Hydrogen sulfide is heavier than air, which means it will stay close to the surface or settle in low areas. As the manure in this structure was being agitated and stirred, high levels of this toxic gas would have been released when the crust of the manure was broken, Hill pointed out.

As the amount of gas built up on the surface of the manure, it likely spilled over the top of the wall and rolled to the ground.

“At high levels, this toxic gas can cause loss of consciousness and stopping or pausing of breathing and can lead to death,” he said. “At extremely high levels, breathing will cease and death can occur within minutes.”

Federal and state agriculture officials have raised concerns about the possibility of higher-than-usual levels of hydrogen sulfide gas being emitted from manure pits containing gypsum-based animal bedding, such as was used on this farm.

Hill said he plans to work with the U.S. Department of Agriculture’s Natural Resources Conservation Service and others on research to determine if there is a connection between gypsum bedding, elevated hydrogen sulfide levels and manure-pit incidents.

He is looking for farmers using gypsum bedding who are willing to participate in this research. Interested farmers can contact him at 814-865-2808 or by email at deh27@psu.edu.

Hill said carbon dioxide also is released during manure agitation. This gas, which is heavier than air, is also colorless and odorless. “Carbon dioxide displaces oxygen and, at high levels, can cause a person to quit breathing,” he explained.

Ammonia, another manure gas, is lighter than air, which means it normally will rise once it’s released, according to Hill.

“This gas is colorless but has a very pungent odor which will get stronger at higher concentrations,” he said. “This property will cause anyone exposed to this gas to vacate the area immediately.”

The recent incident should be a warning to other farmers that have manure storages where toxic gases can be released, Hill stressed. He offered the following recommendations regarding these structures:

Make sure everyone who needs to be near manure-storage structures understand the hazards, including how the various gases can affect them.

Make sure there is no access to low lying areas next to these structures during manure agitation. Consider a buffer zone of at least 20 feet around the structure during this time.

Especially keep children well away from all hazardous farm operations. Lower concentrations of toxic gases can have serious effects on them.

Bystanders and nonessential workers should stay away during agitation and manure pump-out operations.

When agitating manure storages located below animal living areas, realize that dangerous levels of toxic gases can be pushed up through slotted floors into the animal housing. Make sure these spaces are well ventilated before and during agitation. In some cases, people and animals should be removed before agitation of the manure.

If you must be near spaces that are being agitated, wearing a portable gas detector would offer an early warning if toxic gas is present. This device is relatively inexpensive and can measure a single gas (hydrogen sulfide is suggested) or multiple gases and can give warning by sounding an audible alarm when dangerous levels of gas are being released.

Other safety suggestions related to manure storages can be found online at http://www.agsafety.psu.edu/.

Now is the time to plant bulbs