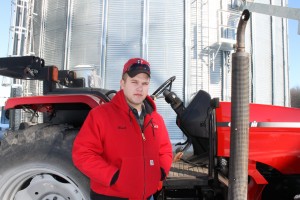 There’s no doubt about that, as the 20-year-old talks about his work on the family grain farm and his involvement as owner and manager of his own snow plowing business, Goodman Snow Services.“

It’s just stuff that you use every day,” he said. “It’s not just the chemistry and math you’re going to learn and forget; it’s everyday experiences.”

But Goodman and his family of farmers, which includes his dad, Gary, and several of his uncles, do spend some time working out the math on their 5,000-acre operation in the Morrow County area.

Gary farms half-time and also works in the construction field. Brock’s uncle, Bill Goodman, serves as farm manager and owner of the main farm, along with help from uncles Doug and Lynn Goodman.

Brock has helped do chores on the farm since he was 12. Today, he can run just about anything he’s asked to, and also has a year under his belt working on a custom combine crew out West.

He also is a volunteer firefighter with the Cardington Fire Department.

“He can run anything there is,” said Bill Goodman. “If it’s got a motor, he can figure it out.”

This time of year, there’s not much to run, aside from grain trucks. But come spring and harvest season, Brock and his family have a full schedule. He also helps do some part-time milking at a nearby dairy farm.

Brock won the FFA’s 2012 Star Farmer Award last May and is a good example of what Ohio’s top ag students can do.

Neil Swonger, the FFA teacher at Cardington High School, said he knew Brock had the ability to be an agribusinessman since his freshman year, when he ran his own landscaping business.Out of the state’s 25,000 FFA students, Swonger said it speaks volumes that Brock won this top honor.

“He’s an example for the kids, the community,” Swonger said.

Brock is studying crop production at the Agricultural Technical Institute in Wooster. There was never a doubt in his mind that he wanted to be a farmer.

“Basically, my whole life I wanted to be in the buddy seat riding along,” he said.

He rented his first piece of ground — eight acres — as an FFA project and also raised some swine. It was his first experience handling a real farm investment on his own, and a precursor to his future.

“That was a big accomplishment for me,” he said. “When I was younger I used to push the toy tractors across the carpet just hoping to be out in the field some day. There’s just nothing else I’d rather do.”

When Swonger asked his students to start a business for an assignment, Brock was well ahead of the group.

“For him that was an easy project, because he had already lived it,” Swonger said.

The FFA helped him learn to better interact with people and customers, and to take responsibility for what needs done.

“Growing up around farming you kind of think you know it all before you go into FFA,” Brock said. “But it definitely helped on the people side of it because we did a lot of job interview contests and public speaking contests.”

The banquets and meetings required him to speak, and he had to overcome one of society’s biggest fears.

He said he enjoys farming because it’s hard work and it’s rewarding.

“Just putting something in the ground and watching it grow and knowing that’s what you worked for,” he said. “There’s never a day off.”

Read about how a Coshocton County young farmer is helping run his family’s operation.