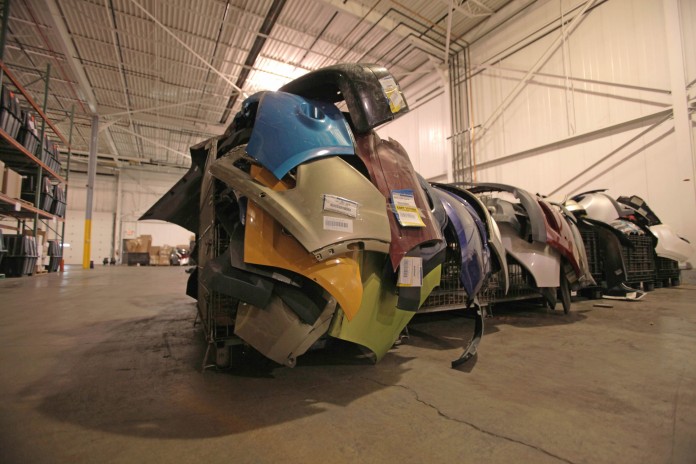 DEARBORN, Mich. — About 120 million pounds of damaged vehicle parts have been processed through the Ford Core Recovery Program since its inception; the program celebrates 10 years in 2013.

Reusing parts as often as possible helps control costs and quality, while conserving valuable resources and giving new life to vehicle components otherwise likely destined for a junkyard or landfill.

Ford’s recycling and remanufacturing program has kept 120 million pounds of damaged vehicle parts from landfills since 2003, effectively ending the days when the crack of a headlamp or crunch of a bumper would render useless such components.

The Core Recovery Program oversees collection, remanufacturing and recycling of damaged parts — everything from small sensors and fuel injectors to large engine parts — from Ford vehicles that have been repaired through the company’s dealer network.

Several issues necessitated the program — from more complex and expensive parts in cars and trucks to a need to get more control over the sale of aftermarket components and a need to recycle more.

“Most parts that come back to us through the program still have a lot of life left,” says Kim Goering, manager of Ford’s remanufacturing and recycling programs. “That makes a strong business case to do whatever we can to extend the life of these components. Even more important, however, is that Ford strongly believes it’s just the right thing to do from an environmental perspective.”

Ford has remanufactured parts for decades, but it formed the Core Recovery Program in 2003. The impetus was that there were too many different collection methods being used in various parts of the company, making it too hard and confusing for all the parties involved — from the dealers to those managing Ford’s supply chain.

General recycling awareness has increased, too. The U.S. EPA reports that in 2010 recycling helped keep 85 million tons of material from being disposed of in landfills — up from 15 million tons in 1980.

Other factors led to the creation of the Core Recovery Program: Vehicle components, for example, have become increasingly complex and expensive, making it more important than ever to recycle and reuse parts whenever possible.

Take the headlight portion of the program: As recently as 15 years ago, headlights were pretty basic and utilitarian — consisting mostly of a bulb, a glass lens and a reflector.

Now, typical headlight assemblies are almost two feet wide and have become a major part of the vehicle, both in terms of design and function — consisting of not just a few parts, but expensive plastics, advanced bulb technology, additional wiring harnesses and more.

The headlight portion of the program started in November 2011. In its first year alone, about 26,000 units were reclaimed and every single part of the headlamp is recycled. In fact, more than 85 percent of each Ford vehicle today is recyclable, with more and more parts being kept from landfills.

Bumpers, for example, are now collected and sent to a third party where they are processed into pellets that can then be used to make brand-new products. Since 2010, about 62,000 bumpers have been recycled through the program.

“These bumpers are typically between five and six feet long and can yield as much as 20 pounds of material after they have been processed,” said Goering. “That adds up fast and makes it pretty easy to see how much of an impact the program makes — and that’s with just one category.”

Yet another benefit of the Core Recovery Program is it helps keep damaged parts from being resold in the aftermarket, says Mark Trombetta, manager of the Ford Regional Core Recovery Center Network.

For example, Ford doesn’t want to encourage people to try and somehow fix the new complicated headlights of today’s vehicles.

“Unauthorized selling of Ford parts in the aftermarket can be a problem because Ford has no way to ensure the level of quality,” he says. “Then you have a situation where a part being utilized doesn’t truly reflect Ford’s high standards of quality, but still has the Blue Oval on it.”

Dealers pay a core charge on each new part bought from Ford to replace a damaged one. When the original damaged part is returned to Ford, the dealer gets the money from the core charge back — operating exactly like bottle return systems do in some parts of the U.S.

To collect the damaged and broken parts from dealers, Ford works with distributors strategically located around the country, such as RMP Powertrain Solutions of Brownstown Township, Mich. The 35,000-square-foot center serves as the central collection point for Ford dealers in southeast Michigan, Ohio and Indiana.

Ford uses a proprietary system involving bar codes and scanners to keep track of every single part collected. Once collected, each part is evaluated for either recycling or remanufacturing potential.

Parts recycled are sent to third-party processors and the raw material is resold. When parts are remanufactured, they are cleaned, machined and tested to meet Ford quality standards.

Like the raw material that comes from recycling, the parts that are remanufactured can then be sold or used in new applications. In the rare instances when recycling or remanufacturing is not an option, Ford ensures proper disposal.

Goering says whether parts are recycled or remanufactured, the Core Recovery Program has been profitable for Ford — and that it could grow even more.