ROCK SPRINGS, Pa. — Penn State University is coming out with something many Pennsylvania landowners with an interest in shale oil and gas development will want to examine.

Penn State Marcellus Center for Outreach and Research associate director Jim Ladlee said he has been working on developing the production curve and royalty estimations. Now, Penn State is offering a web-based app to look at data across Pennsylvania.

Ladlee said the projections he sees in the cumulative production and decline curves show what the wells will be producing for the next 30 years.

He estimates that most wells will produce between 4 and 8 billion MMcf (MMcf is 1 million cubic feet) in the well’s lifetime, but, he added, wells in Bradford, Lycoming, Susquehanna, Washington and Greene counties are showing estimates above those marks.

He said the early stage of shale exploration included well production estimates based on experience with other shale formations like the Barnett Shale. 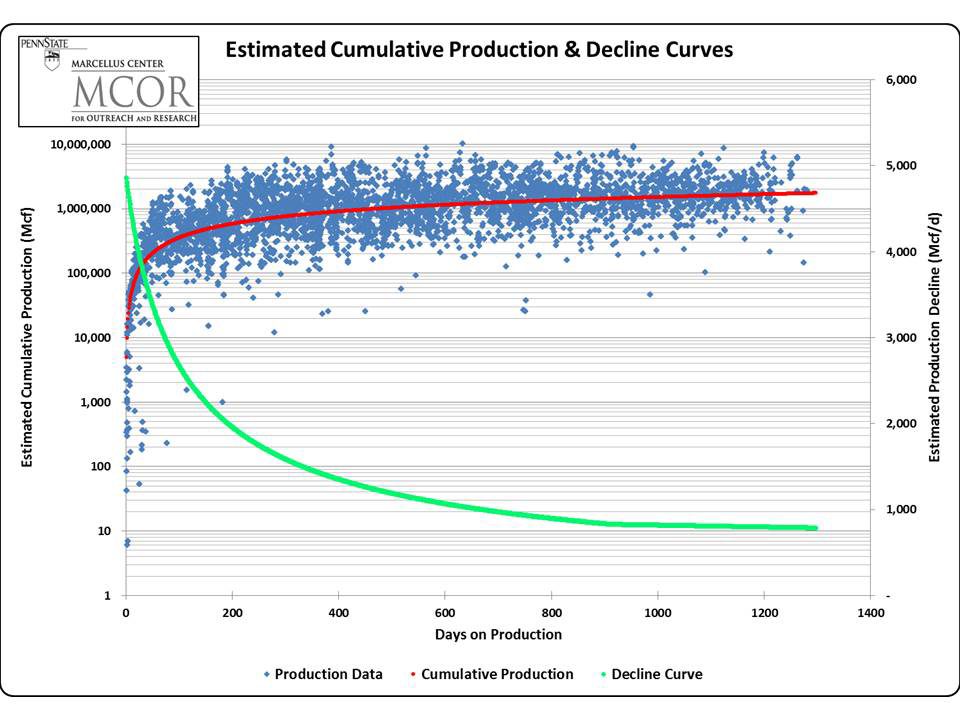 Ladlee said the early estimates were useful for companies to develop an interest in further Marcellus development, but the lack of actual production data made estimating production of an Appalachian Basin well somewhat challenging.

To create better well estimates and help owners of oil and gas rights estimate  potential royalties, Ladlee said it is important to look at all types of factors, including initial well production, decline rates and overall production.

Ladlee said geology determines how much natural gas might be available for extraction. The geology of the Marcellus does vary, sometimes even on the same well pad.

In addition, the number of wellbore stages completed is also thought to influence initial production. A stage is a length of the wellbore completed at a given time.

Ladlee said a typical 5,000-foot horizontal wellbore may include 10-35 stages ranging in length from roughly 100-500 feet each.
The influence of the number of horizontal stages on initial and overall production is still a topic of debate and research, however, many drillers are trending toward more and shorter stages.

For example, if a well has an initial production rate of 10 million cubic feet per day and declines over the first year to 3 MMcf, future production estimates need to be based on 3 MMcf per day.

Ladlee explained that as shale wells remain in production, the volume of natural gas will shift from a sudden decline to a steady exponential decline.