ALIQUIPPA, Pa. — As visitors pull onto a back road in western Pennsylvania, they may be surprised to find a driveway lined by rows of peach and apple trees. The farm is the McConnells’ Farm, known for the summer fruit and vegetables it produces.

The farm motto, “home of the sweet fruit and sour people,” reminds the farming family that they do the hard work they do, in order to grow the sweetest fruit around the area. They aren’t the first generation to work the ground, in fact, they just welcomed their eighth generation into the family. 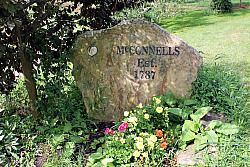 In 1787, a man who the McConnell family says was “too stubborn to quit” settled the farm. John McConnell’s father served in the Revolutionary War and the 200-acre parcel of land was payment for his service.

Although different portions of the property have been sold and others purchased, the farm remains at 200 acres today, and is recognized by the state as a Bicentennial Farm. 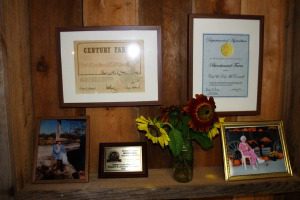 John McConnell and his wife, Susanna Van Kirk, built a small cabin and lived there for many years. Later, the McConnell family moved out of the cabin and into a farmhouse built on the farm.

The farm served as a general farm, then in the 1930s, Fred McConnell, the fifth generation, started selling produce at a farm market in Coraopolis, Pennsylvania. Buoyed by that success, he started planting peach trees and nectarines.

Fred wasn’t alone in the business, as his wife, Ann, was known for producing strawberries and flowers.

The couple was determined to make a family business successful as the country came out of the Great Depression.

Then in the late 1970s and early 1980s, Fred and Anne’s sons, Ed and Cal McConnell, came back to the farm. Ed had graduated from college and Cal had retired from the U.S. Air Force and they decided they were interested in expanding the business and farm acreage. As time progressed, the farm’s production transitioned from vegetables to fruit. 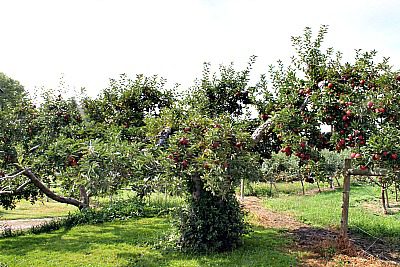 Today, the seventh generation born on the farm — Calvin McConnell, an Army veteran — continues to build the farm market with his Uncle Cal and his dad, Ed.

Ed works off the farm as a high school social studies teacher and Cal continues to work in the fields and orchards. Others involved in the farm include Calvin McConnell’s brothers, Will, Joel and Merle, and their cousin, Amy Shaarsmith.

“With farming, you can’t help but be humble or grounded, said Calvin McConnell.
McConnell said his grandfather Fred’s strong point was peach production. In fact, he had a couple hundred peach trees when he was growing up. Today, the farm is home to 10 times the amount of peach trees.

McConnells’ Farm is known for its peaches. There are over 4,000 peach trees of more than 50 varieties. The varieties include Red Havens, Jersey Glo, Glowing Star and Harcrest.

“Our peaches sell themselves,” said McConnell, who believes it’s the hands-on approach of pruning and trimming, the varieties grown and the soil itself that help to make the fruit some of the best around. The farm picks fruit four or five times a year, especially on the peach trees, and follows a strict pest management program.
“It’s the work we put into it,” said McConnell. “I’d put our peaches and apples up against anyone else.”

However, the winter of 2014 destroyed the McConnell peach crop, but that’s hasn’t closed the market. The farm was able to offer vegetables and apples as part of the selection available to customers. 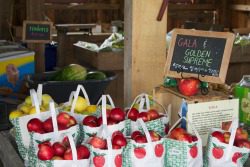 McConnell acknowledges that it is a tough way to make a living, but the clientele keeps the farm going.

McConnell said as the farm has changed, so has the clientele. He said there has been a resurgence in home canning and freezing, which has generated a lot of business. In addition to its own market sales, the farm participates in the occasional farmers markets.

He said the trick is to get the younger generations to come to the farm where they can pick their own and have a wider selection of products than what can be offered at the farmers markets.

The majority of the time, the farm uses a “low tech” plan to get the word out about their crops. It’s mostly word of mouth or prior customers. This year, however, the McConnells used the loss of the peach crop, or more specifically, the time that previously was devoted to the crop, to change up some marketing systems, to target the younger generation that wants to know more about their food.

The farm developed a website and engaged in social media, using Facebook and Twitter to reach a new clientele. The farm has also introduced an email newsletter.

“Social media takes time, but this business, I think it will pay off,” said McConnell.
He added people are eager to get signed up for the newsletter.

“We are looking for people who are interested in the quality of the fruit we grow,” said McConnell.
McConnell said his idea is to reach people they might not be reaching with traditional marketing strategies.

McConnell said the farm recently purchased new Mattox air pruners that make the chore easier, since orchards and vegetable farms are very labor-intensive and the family tries to do as much as possible itself.

The farm has also explored new varieties grown on the farm. Most of the orchards are filled with semi-dwarf varieties, which help in the harvest season. And, because they’re a retail operation, they’re moving from the Gala apple to the Buckeye Gala or the Jonagold because it has better coloring. 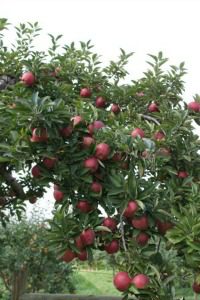 McConnell said he knew after serving overseas, he wanted to bring something new to the farm, so he build a new market building. He purchased a building from an Ohio Amish family and then had an Amish crew reconstruct it on the farm.
He plans on expanding the products and services offered to include a bakery and allow local businesses to place their soup mixes, candles and soap inside for sale.

“Our focus is to maintain our high level of quality produce,” said McConnell. 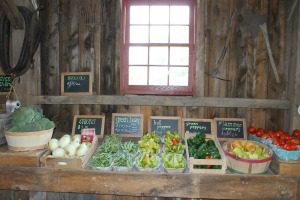 McConnell served in the military for seven years and remains in the U.S. Army Reserves, and completed an overseas tour last year. But besides serving his country, his family is what matters to him — and he wants to make sure the farm stays in the family for his daughter, Mallory, and enjoy a farm life with his wife, Marella, who is an elementary school principal.