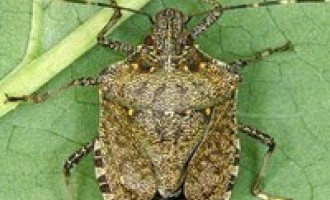 WOOSTER, Ohio — Soybean-damaging bugs known for their “sweaty feet” smell when squashed or irritated have made their way into Ohio soybean fields in numbers not previously experienced in the Buckeye State, an Ohio State University Extension entomologist said.

Growers are being advised to be on the lookout for the brown marmorated stink bug, said Ron Hammond,.

A native of eastern Asia, the brown marmorated stink bug was first identified in the U.S. in Allentown, Pa., in 2001. The brown, three-quarter-inch bugs are known to feed on a wide range of crops, including apples, peaches, tomatoes and soybeans.

Likewise, Hammond said, sightings of larger-than-usual numbers of green stink bugs have also been reported in Ohio soybean fields, as well as reports of red shouldered stink bug, which is a newer pest in Ohio.

“This is the first year we are seeing this amount of green stink bugs in Ohio, as they are typically more prevalent in southern areas,” he said. “With the warmer temperatures experienced over the past decade, we predicted that we would see more stink bugs in the north than normal.”

The concern for soybean growers is the potential for yield declines as a result of stink bugs, which use their piercing-sucking mouthparts to feed on the plant seeds, Hammond said.

“They cause direct damage to the seed,” he said. “It doesn’t take a lot of stink bugs to cause an economic loss. “Growers need to be aware of this, especially for food grade (soybeans) and soybeans grown for seed.”

Growers are advised to sample their fields for the smelly pests, Hammond said. To do that, growers need to take multiple, 10-sweep samples with a sweep net in multiple locations throughout the field, he said. Then, average the number of stink bugs in the 10-sweep samples.

Because stink bugs often occur mainly on the field edges, especially next to woody areas, growers should sample both the field edge and within the field to determine which parts of the field may require treatment, he said. “If treatment is required, most insecticides registered on soybean have stink bugs on their label,” Hammond said.

“However, at this time of year, growers should make note of the pre-harvest intervals, as many insecticides probably can no longer be used because of the short time before harvest.”