WEST LAFAYETTE, Ohio — As they flip through the pages of their family history and photo albums, Jim and Wendy Schumaker think about what it was like to live and farm in a different era — an era that goes back more than 200 years.

Their Coshocton County farm has been in the family since 1806, and they have spent countless hours researching and documenting the different owners and how the farm looked over the years. 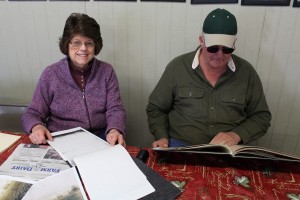 Their research has taken them to Marietta — and to Romney, Virginia (present-day W.Va.), where the farm’s original owners came from.

“It took awhile,” Wendy said. “It was interesting, though.”

According to one of the books, some of the farm’s ancestors were known for having “the finest flock of sheep” in that part of the state, and for being involved in the local agricultural community and county fair.

History is written in the Schumaker buildings and fields, as well.

From the historical signs along the road, to the well-kept barns and outbuildings, and on back the lane to the family cemetery, it’s clear that tradition runs deep.

As the road sign proclaims, the farm dates back to 1806, when it was established by the Francis McGuire family of Hampshire County, Va., at a sizeable 1,496 acres.

Jim and Wendy, both 64, are the current generation to run the farm, and the sixth generation of family to live on the same farm. The farm was formally recognized as an Ohio Bicentennial farm at the Coshocton County Fair in 2013.

Over the years. Much has changed in those 200 years, starting with the size of the farm. The original 1,500-acre farm is now down to about 40.

The reason, according to Jim, is that each time the farm was passed down, it was usually passed down to multiple heirs.
Although he has only about 40 acres of the original farm, his family rents additional acres, where they grow corn and soybeans, alfalfa and sweet corn.

A family friend, Wendell Waters, takes care of most of the crops, while the Schumakers’ son, Chad, farms part-time by making hay and raising Holstein calves to sell as feeder calves. The Schumakers have another son, Todd, who works for American Electric Power.

The buildings on the farm date back to at least 1887, as printed on the slate of the main barn roof, and they’re well preserved, with good paint, good roofs, and a sound framework. 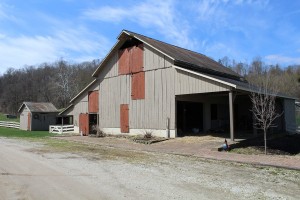 Jim and Wendy sell produce during the summer, from a special building that Jim’s father, Robert, built following his service in World War II, to serve as a commercial garage. Over the years, the building has served as an auto shop, Ferguson tractor dealership, a boat dealership, and, since about 1983, as a farm market.

The Schumakers grew and sold their own produce until about 1998. And they grew their own pumpkins until two years ago, when a drought wiped out the whole crop.

Today, they still grow and sell their own sweet corn — 8 acres worth — but they source most of their other produce from local growers (including Mount Hope Produce Auction), and sell it in front of the garage July through October.

Buying from an auction helps to ensure a steady supply, and allows the Schumakers to focus their time on other things — like growing fresh sweet corn.

“Before, when we raised our own stuff, we had to deal with the weather and the chemicals and the help,” Jim said. “Now we can go up there (to Mount Hope) and buy just what we want.”

They also use the garage for community meetings, and it serves as a banquet hall for Wendy’s catering business, which she started in 1995. 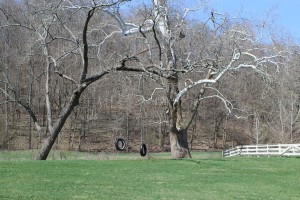 The historical buildings on the farm, as well as the scenic woodlands and open spaces, make it an attractive place for weddings and family events. She caters for dozens of weddings every year at the farm, both indoors and outdoors, and has developed her own line of barbecue sauce that she makes about every week.

Wendy went full-time with the catering about 2004. Her only regret is that she didn’t get into catering sooner.

Jim and Wendy moved to the farm in 1977 and began an extensive remodeling project that included 75 gallons of paint. He serves as a Lafayette Township trustee and they both continue to make improvements to the farm, and to experiment with new business ventures, including selling mulch.

Growing up, Wendy’s aunt and uncle had a dairy farm and Wendy saw how hard they worked all year. She decided she didn’t want to marry a farmer — but things didn’t work out that way.

“I said I wasn’t going to marry a farmer … and I ended up being one,” she said.

However, the couple today shares the same passion for the farm and have already formed a trust, so it will pass to the next generation “without any interruptions.”

Jim said farming is the only thing he and Chad ever wanted to do, and said “it’s important to keep the history of the farm going.”

But even before the farm changes hands, it’s already being shared with thousands of people. In addition to all the weddings and special events held at the farm, the Schumakers also keep a few animals for children to see, when they visit the farm stand with their families.

Up until recently, they invited school children to see the farm and the pumpkins.

The Schumakers also have three grandchildren: one grandson and two granddaughters.

It looks like Todd and Chad will preserve the family farm for many more years to come.

But if not, “I keep telling the boys we’re going to be buried back there so we can keep an eye on them and haunt them if they don’t do something right,” Jim said, pointing the family cemetery back in a meadow that overlooks the farm.

In reality, the Schumakers share a similar vision for the farm, one that includes a respect for its history and its future. 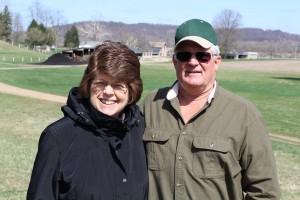