SLIPPERY ROCK, Pa. — As a western Pennsylvania resident, I’ve long admired the red ware pottery of the Pennsylvania Germans who farmed in the growing season and worked at their craft as time allowed.

I thought of those early potters as I visited their present day counterparts at Atamora Village in the State of Osun, Nigeria.

My host, Ibukunoluwa Ayoola, who we call IBK, is the village leader and master potter of Atamora. He is a university graduate and worked in Lagos as an accountant, but found the desk job too monotonous.

He moved back to his grandmother’s village, determined to make a living as a potter-farmer.

Pottery making in Nigeria is traditionally woman’s work and, like the early Pennsylvania Germans, the pottery was strictly utilitarian.

But the advent of cheap plastic containers and metal pots destroyed their market.

Elderly ladies still practice the craft and, unlike long-established traditions and skills that are passed to the next generation, no future exists and pottery is a dying art.

I was in Nigeria in May, and again in August 2013, at the invitation of the State of Osun Gov. Rauf Aregbesola to establish a facility to produce the silver enhanced ceramic water filter.

He had heard of the water filter from some of his advisers and visited our training and production facility at the Pot Shop of the Braddock Carnegie Library in Braddock, Pa., last February.

Skilled potters are the most important element to establish a successful production facility. They know their local clays and have experience to fire kilns. So, on my first venture to Nigeria, my priority was to meet potters.

Accompanied by a group of government officials in a large van, we pulled up to a roadside pavilion stocked with wonderful-looking pottery. A formidable man almost 7 feet tall came to meet me as I emerged from the van.

“Do you know Ron Rivera?” he asked.

Ron Rivera was the international coordinator of Potters for Peace and one of the main developers of the ceramic water filter. Rivera worked out of Nicaragua, helping to promote indigenous potters and market their work in North America. He discovered the filter being produced in Guatemala and, after the devastation of Hurricane Mitch, managed to start a filter factory in Managua.

In 1999, I served as faculty adviser to a group of Slippery Rock University students doing relief work at the filter factory Nicaragua, where I met Rivera.

IBK explained that Rivera had been to Nigeria five years before and promised to come back to start up a factory. After many months of waiting, the Nigerians learned he had died of lethal form of malaria and when they saw me from a distance, with my white hair and beard, they thought I was Ron raised from the dead.

IBK took us on a bumpy dirt road back toward the village. Fields of corn were growing in various stages and lots of cassava plants were thriving. The corn seems to be a cross between our field corn and sweet corn, and because of the extended growing season, they grow three crops a year.

Their biggest crop was potatoes, but they also gained significant income from palm oil. Elderly ladies sat on the ground picking palm seeds from tangled branches.

Fifty-five gallon drums sat on rocks with wood fires underneath to boil the palm seeds extracting the oil. They get about $25 dollars for 7 gallons of oil.

The pottery water filter I was there to help produce looks like a big flower pot. It’s fashioned from clay and sawdust, which burns out in the fire.

The porous ceramic vessel is treated with microscopic particles of colloidal silver, which has bactericidal properties, and sits in a covered 5 gallon bucket, with a faucet at the bottom. It filters 2 to 3 liters of water an hour, plenty for a family of five.

Tens of thousands of filters have been distributed worldwide by organizations such as the Red Cross, Doctors Without Borders and UNICEF.

Through my experience in Nicaragua, I learned that 5,000 people, mostly children, die every day from waterborne disease. I became an evangelist for the water filter.

The governor asked if there were enough raw materials to produce the filters. He smiled and nodded approval at my reply:

“We have enough clay and sawdust in Osun to make a filter for every man woman and child in Africa!” 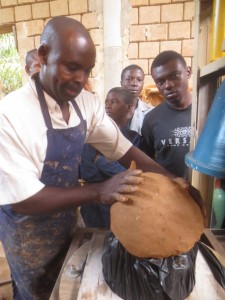 We had shipped a special machine to press the filters utilizing an eight-ton hydraulic jack. We usually try to have the machinery constructed in a local shop, but I was anxious to get stared and they had kilns and clay ready to go.

Sawmills are everywhere in this part of Nigeria Most trees are from 5 to 6 feet in diameter. They have mountains of smoldering sawdust burned off as a waste product.

We can use some of the sawdust in the filter, but we make efficient sawdust burners that can be used to fire the kilns, converting the waste into fuel.

Our machine took almost a week to clear customs. (A traveling preacher came on a motorcycle to pray the machine would arrive before I had to leave. He prayed in English and in the Yoruba language.)

Excitement was high when we finally had the machine at the pot shop. We reassembled parts and tightened all the nuts.

Our first filter was very uneven and after making several adjustments without success, I determined the female mold was bent. Using mechanical skills learned on the farm, I whacked it with a big hammer. It was perfect.

The goal is to create sustainable business at Atamora and have a facility capable of producing 1,500 filters a month. The western Pennsylvania-based Potters Water Action Group hopes to establish a training center so we can establish similar facilities in other areas of Nigeria.

We believe that the best hope for ecological balance is to encourage development and opportunities in small villages like Atamora, and we’re doing it through water, one drop at a time.