HARRISBURG, Pa. — A sculpture made from nearly 1,000 pounds of butter was unveiled at the Pennsylvania Farm Show, celebrating the 60th anniversary of the show’s iconic milk shake served by the Pennsylvania Dairymen’s Association.

The sculpture, sponsored by Mid-Atlantic Dairy Association and Pennsylvania Dairy Promotion Program, takes its cue from the number one song in 1954, “Shake, Rattle and Roll” and features a family enjoying a milkshake while watching a cow couple “shake.”

The Pennsylvania Dairymen’s Association, together with the Valley Grange #1360 from Lewisberry, serves 140,000 of the vanilla, chocolate and mixed milkshakes each year in the show’s famous Food Court and Food Court Annex. Proceeds benefit scholarships, youth programs and agricultural education programs across the state.

Crafted by Jim Victor of Conshohocken, Montgomery County, the butter sculpture creation begins in mid-December and is finished in time for the Farm Show. Victor also creates sculptures using chocolate and cheese.

At the close of the show, the butter, donated by Land O’ Lakes in Carlisle, Cumberland County, will be given to a Juniata Countydairy farm. The butter will be put through a digester and converted to about 65 kilowatt hours of electricity to help operate the farm. 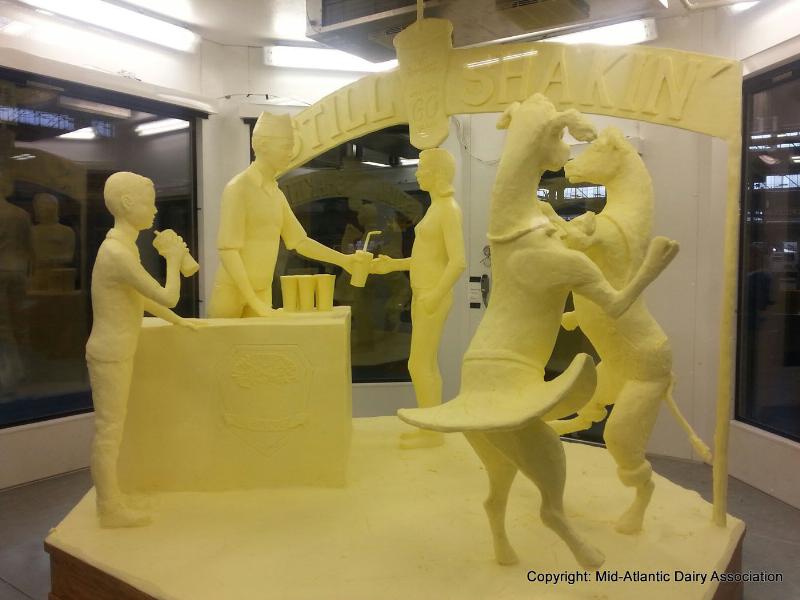