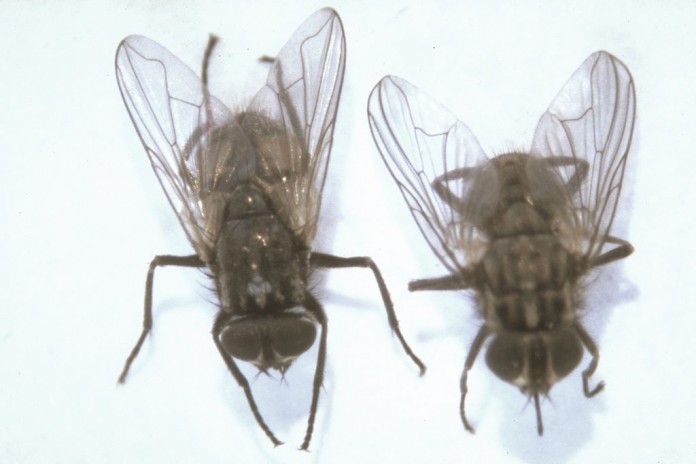 MANHATTAN, Kan. — Those pesky house flies buzzing around your home or invading your springtime picnic could be doing more harm to human health than you realize.

According to a recent study by Kansas State University, published in the Applied and Environmental Microbiology journal, insects carry antibiotic-resistant bacteria from one point to another, including from food animal farms and wastewater treatment facilities, for example, to urban areas.

“There are a number of insects that are commonly associated with animals, such as house flies and cockroaches,” said Ludek Zurek, K-State professor of microbial ecology and lead author on the published study.

Zurek and his colleagues collected house flies and cockroaches from food animal production locations, including swine and poultry farms, as well as wastewater treatment facilities that collect waste from multiple sources, including hospitals.

The researchers then genetically analyzed the bacteria in the digestive tract of the insects and compared them to the bacteria present in the animal feces and wastewater.

“We found these insects carry the same bacteria found in the animal manure,” Zurek said. “Then we started sampling insects found in surrounding urban areas, including fast food restaurants, and again, we found house flies with multi-drug resistant bacteria.”

The house flies collected from the wastewater treatment plants, likewise, carried the same bacteria found in the waste itself, he said.

House flies collected several miles from the wastewater treatment plants in surrounding urban areas had a lower prevalence of the antibiotic-resistant bacteria than those examined from the facilities themselves, but the bacteria still existed in those urban house flies.

The study led the researchers to conclude that insects, primarily house flies, can pick up antibiotic-resistant bacteria and disseminate them to surrounding areas. How serious that link is still needs to be investigated, but the potential is clearly there, Zurek said.

In addition, Zurek’s team showed that bacteria in the house fly digestive tract can exchange antibiotic resistance by horizontal gene transfer. The resistant strains multiply in the fly and can be left behind on food by fly regurgitation or spitting, and defecation.

Antibiotics, since their discovery 70 years ago, have saved millions of lives, Zurek said.

“Unfortunately, because of the intensive use of antibiotics in human medicine, we pose high pressure on bacteria, and they respond by developing resistance,” he said. “The resistant strains then survive and are selected by antibiotic treatments.”

Currently, we have situations where people get infections they die from because the antibiotics are not effective anymore. The bacteria that caused the infections are multi-drug resistant.”

According to a 2013 report by the Centers for Disease Control and Prevention (http://www.cdc.gov/drugresistance/threat-report-2013), at least 2 million people become infected with antibiotic-resistant bacteria, and at least 23,000 people die each year as a direct result of these infections in the United States.

Antibiotics in food animal production are not only used to treat infections in animals but also in helping animals grow.

“Antibiotics in low doses are added as feed additives, primarily in poultry and swine diets,” he said. “The outcome is that the animals grow faster. At the same time, if you use low doses of antibiotics extensively, that poses selective pressure on bacteria in the digestive tract of these animals and results in antibiotic resistance.”

Humans experiencing more problems with antibiotic resistance could be due to many potential reasons, Zurek said, including overuse of antibiotics in human medicine and human connection to antibiotic use in food animals.

There are likely many other potential environmental connections as well, so it’s hard to pinpoint specific infections and where the antibiotic resistance originated.

In addition to the insects, Zurek and his research team have also showed that wild birds, such as ravens and crows, carry multi-drug antibiotic-resistant bacteria.

“Wild birds can pick up the antibiotic resistant bacteria from fields where animal manure was used as a fertilizer,” he said. “We still don’t know how significant these birds are as carriers. We just know there are multiple venues where wildlife can acquire resistant strains and move them around in the environment.”

To help eliminate the potential connection to food animal production, the U.S. Food and Drug Administration last December released its first request to antibiotic manufacturers to voluntarily remove antibiotics from the list for animal growth promoters.

Lowering the use of antibiotics in animal industry will be another step to lower prevalence of antibiotic resistant bacteria in the environment and in human infections, Zurek said, but because antibiotic resistance in human infections is such a serious global health problem that has led to higher patient mortality rates, prolonged hospitalization and increased healthcare costs, it needs to be tackled from many angles.

“Clearly, pest management and trying to minimize the pest populations on farms and outside of the farms is one way,” he said. “House flies aren’t just a nuisance. They can carry antibiotic resistant bacteria, so they should be taken seriously as a vector.”